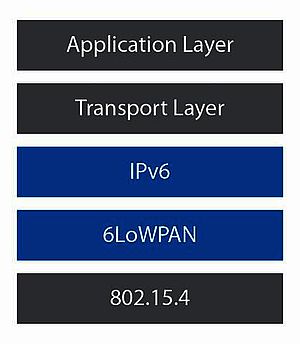 However, even with networked machines, connectivity's full potential isn't realized, as machines still typically operate as islands, or individual modules, not interacting with or even being aware of preceding or subsequent machines. To realize the potential of Industrie 4.0, individual machines must be able to control or influence other machines in the factory.

The industrial-automation future is a production environment in which devices, machines, and materials are equipped with sensors. Major industrial-automation suppliers promise interoperability among factory-floor devices, and extending to cloud-based enterprise applications and corporate data centers. This bridges the divide between networks for information technology and those for operations technology. Collaboration enhanced by connectivity increases production quality, efficiency, and flexibility.

Every sensor, actuator, and factory machine becomes a network participant. Access to the data throughout the enterprise supports operational efficiency. However, a standards-based approach that leverages existing infrastructure is required, while remaining platform and operating-system agnostic to support many different devices.

For resource-constrained devices, protocols historically deployed for data transport and cloud integration were proprietary and not internet protocol (IP)-based. This was due to the large overhead and resource requirements associated with IP packets. Proprietary protocols were embraced because IP was not considered practical for low-power network nodes, like sensors and actuators, as IP was bandwidth-hungry and memory-intensive. However, with the introduction of IPv6 over Low Power Wireless Personal Area Networks (6LoWPAN) the industrial internet of things (IIoT) landscape has changed.

According to Wikipedia, 6LoWPAN is the name of a concluded working group in the internet area of the Internet Engineering Task Force (IETF). It originated from the idea that the IP could and should be applied even to the smallest devices, and that low-power devices with limited processing capabilities should be able to participate in the internet of things.

Thus, the use of standards-based IP over low-power link technologies is now possible.

6LoWPAN is an adaption layer between the IP link and the network layer to enable transmission of IPv6 packets over low-power wireless connections like 802.15.4. 6LoWPAN provides header compression and packet fragmentation to reduce payload size, which allows the low-power transmission of standards-based IPv6 packets. With layer-2 packet forwarding, 6LoWPAN supports large quantities of nodes in low-power networks requiring multiple hops over large areas. 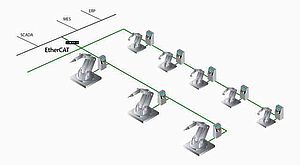 Ethernet for control automation technology (EtherCAT) is one example of a fieldbus solution that uses existing standard Ethernet infrastructure. EtherCAT is a globally emerging technology that could potentially lead toward a standard for Ethernet fieldbus.

As network traffic is generated from the master EtherCAT controller, EtherCAT slave devices process each frame "on-the-fly" without stopping them. Data reads and writes can be extracted and inserted by each slave device as the frame navigates throughout the network without losing any overhead. As the required control-loop period can change depending on the control function required, EtherCAT offers flexibility. Longer cycles for I/O updates, or ultra-short cycle times for synchronizing robotic arms, for example, can coexist on the same wire.

To prevent any degradation to performance, the switchport takes care of inserting TCP/IP packets into the EtherCAT traffic in a manner that prevents the network's real-time properties from becoming infected. Additionally, EtherCAT devices may also support Internet protocols (such as HTTP) and can therefore behave like a standard Ethernet node outside of the EtherCAT segment. 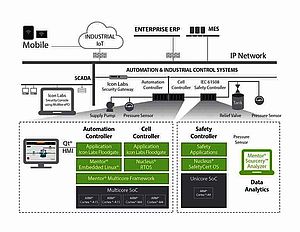 While EtherCAT is inherently secure, tunneling to other networks within the enterprise using TCP/IP can lead to problems. Integration with EtherCAT demands protocols that address the security required to prevent device compromise connected to the fieldbus. Recently, EtherCAT and the OPC Foundation announced collaboration plans to jointly support the Industrie 4.0 standard. The OPC unified architecture (OPC UA) was designed with system-wide security in mind.

OPC UA includes countermeasures against cyber threats such as denial-of-service attacks, compromising extranet or cloud components, and introduction of malicious software via Intranet or Internet. It is implicitly secure, using access control, encryption, digital signatures, and X.509 certificates to address security requirements. Because OPC UA is platform-independent and scalable, it integrates devices throughout the enterprise. OPC UA can be deployed on embedded devices executing real-time operating systems or for services running Linux and Windows platforms.

With the combination of OPC UA and EtherCAT, standards-based protocols can integrate the factory floor with enterprise and supply-chain systems.

In addition, Mentor's runtime solutions are integrated with industrial fieldbus support, including both EtherCAT and Ethernet IP, supporting industrial protocols such as OPC UA, CANbus, Modbus, and others.

In an industrial-automation age of connected devices, in which sensors, actuators, and control machines are active network participants, standards-based protocols are emerging to secure transport of data from the factory floor to the cloud.

EtherCAT is a highly useful fieldbus that's enabling a vast number of connected devices to communicate within an already established IIoT/machine-to-machine infrastructure.

This article appears in the IIoT for Engineers supplement for Control Engineering and Plant Engineering.