Ways and means for achieving the free flow of information. 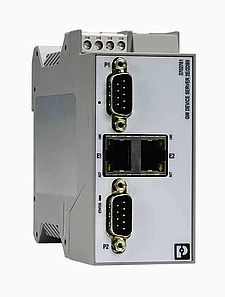 Consumer smart devices are periodically furnished with additional functionality via firmware upgrades. In much the same way, industrial facilities get more out of machinery already in production by equipping it with additional supporting capabilities. For example, making a commitment to technologies for monitoring equipment health improves a plant's overall-equipment effectiveness (OEE). Remote-calibration and configuration capabilities save time and resources needed to pursue improvement. The lynchpin in these efforts is having equipment connected and communicating via Ethernet. However, the road to ubiquitous Ethernet connectivity is not without its obstacles. No one wants to disturb a functioning system or replace functioning devices. Managements won't shut down productive capacity to affect a total change-over. Finally, some devices still may be unavailable with an Ethernet connection.  Get the most out of it Take HART as an example. HART is the global-communication protocol for sending and receiving digital information across 4-20ma current loops. In the past, these loops were the most common way to connect field instruments to distributed control systems (DCS). It is said that more than 40 million HART devices are installed globally. Yet market surveys reveal that less than 10% of these devices are used to their potential. HART enables remote-transmitter configuration and calibration, and is a way to access diagnostic information on a device-by-device basis. The benefit is, in this type environment, that valves tell you they're stuck open, and flowmeters report pressure and temperature conditions. Unfortunately, most installed programmable logic controllers (PLCs) and DCS don't have HART capability. Thus, what's needed is a way to move HART data onto an Ethernet network, without disturbing the existing control system. An Ethernet HART multiplexer solution is a simple way to parameterize and monitor HART devices via HART-IP, Profinet, Modbus TCP, and FDT/DTM for easy integration into nearly any host system. It is a modern alternative to traditional RS-485 HART multiplexers. An Ethernet HART multiplexer's modular design enables scalability and a phased DCS rollout. A multiplexer, including head station and HART expansion modules, can suit many application needs. Also of value is a 1x1 HART master, which means one HART master for each channel. It allows users to speed up maintenance routines, i.e., for multiple instruments at one maintenance interval. The head station includes an embedded web server that makes it easy to configure the device. Additionally, a CommDTM can be used with an FDT frame application, such as PACTware or any of the wide range of plant asset-management applications offered by automation-system suppliers.  Serial data with security Now, let's look at those old serial devices. There are still a lot of them out there with simple RS-232 or RS-485 ports that just spit out an ASCII string of characters-think bar-code scanners, weigh scales, RFID readers, and the like.  Connecting these "dumb" devices to Ethernet gives them a new lease on life. This conversion is not really any stretch of the imagination; serial-device servers (or terminal servers) have been available for years. Keep in mind, though, it's widely reported that malefactors are hacking into these devices when given the opportunity. Also, those old serial devices could, if set free to broadcast data, transmit something never meant for a "public" LAN. Thus, consider some type of data encryption and user authentication plan. Serial-device servers provide a simple way to migrate legacy serial devices to modern Ethernet networks. Devices, ranging from universal RS-232/485, to one-, two-, and four-port serial versions, with one or two Ethernet ports, are available. Device servers may be used as a "virtual COM Port" and as a native TCP or UDP Ethernet device. COM Port redirector software, as well as a Windows driver, are available for integration with a PC application. ASCII to Ethernet conversion 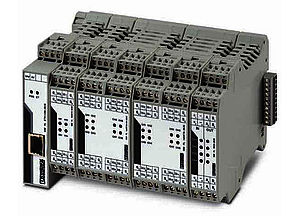 Embedded webservers make start-up and configuration simple. To keep communication secure, look for a device with 256-bit AES encryption and the ability to install your own authentication certificates. Devices with a wide operating-temperature range (-40 to 70°C) and hazardous area approvals are suitable for use in any industry. To take it a step further, integrate those old serial devices into an industrial-control network. New possibilities come to life when an old serial bar-code scanner is converted into a Modbus TCP or Ethernet/IP bar-code scanner. A bar code can be scanned and used to direct a guided vehicle inside an automotive plant, or to push an item onto the correct conveyor belt in a warehouse. Talk about doing more with what you already have. ASCII converter modules are used to convert raw or ASCII serial strings from devices such as bar-code scanners, weigh scales, or RFID tags into industrial protocols such as Modbus TCP or Ethernet/IP. One-, two-, and four- port serial versions, with one or two Ethernet ports are available to fit any need. Last, let's not forget about those old controllers, PLCs, and remote terminal units still clicking away in the far reaches of your domain. They still work fine, but require periodic visitations, not to mention they're uncommunicative. They probably support an old communication protocol like Modbus RTU, but that's not compatible with the shiny new Ethernet network that's been running since the recent facility expansion. Adapting those legacy devices for use with the new system can keep everything humming along for years to come, and they'll even be humming the same tune. Modbus RTU to Modbus TCP TCP/RTU gateways convert serial-based Modbus RTU (or ASCII) to Modbus TCP. These modules are extremely powerful and can be configured to almost any combination of Modbus client and server, including a shared memory configuration, allowing two Modbus masters (servers) to communicate with each other. Device ID aliasing is also supported to create a "virtual" Modbus ID for Modbus devices that do not have configurable Modbus addresses. One-, two-, and four-port serial versions, with one or two Ethernet ports, are available. With minimal investment and effort, you can take the first step into the realm of the industrial internet of things. Equipment and machinery have lots to say, if you have a way to listen, and aging equipment can remain relevant with only a little assistance. An explication of terms 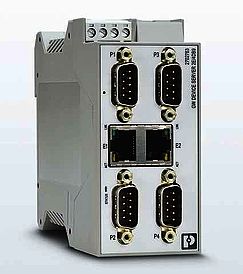 Below is a brief glossary of some acronyms and terms mentioned in this article, with special thanks to Wikipedia. AES (advanced encryption standard): a specification for the encryption of electronic data established by the U.S. National Institute of Standards and Technology (NIST). AES has been adopted by the U.S. government and is used worldwide. The algorithm described by AES is a "symmetric-key algorithm, meaning the same key is used for both encrypting and decrypting the data. ASCII (American standard code for information exchange): ASCII codes represent text in computers and other devices. FDT/DTM (field device tool/device type manager): The FDT joint interest group was formed in 2003 by ABB, Endress + Hauser, Invensys, Metso Automation, and Siemens to establish an international standard based on field-device tool technology. HART (highway addressable remote transducer) communications protocol: a hybrid analog and digital industrial automation protocol. Its most notable advantage is that it can communicate over legacy 4-20ma analog instrument current loops, sharing the wire pair used by the analog-only host system. Modbus: a serial communications protocol that today is a common means of connecting industrial electronic devices. It is often used to connect a supervisory computer with an RTU or PLC. Modbus TCP: a Modbus variant used for communications over TCP/IP networks. OEE (overall equipment effectiveness): a measure often used to identify process improvement possibilities. Profinet (process field net): an industry technical standard for data communication over the industrial internet, with a particular strength in delivering data under tight time constraints. RFID (radio-frequency identification): use of electromagnetic fields to automatically identify and track tags attached to objects containing electronically stored information. TCP/IP (transmission control protocol/internet protocol): the Internet protocol suite is the conceptual model and set of communication protocols used on the Internet and similar computer networks. The suite provides end-to-end specification of how data should be packetized, addressed, transmitted, routed and received. UDP (user datagram protocol): a network communications method and alternative to TCP, used primarily for establishing low latency and loss-tolerating connections between applications on the Internet. Garrett Schmidt is communications interface manager with Phoenix Contact. This article appears in the IIoT for Engineers supplement for Control Engineering and Plant Engineering. - See other articles from the supplement below.