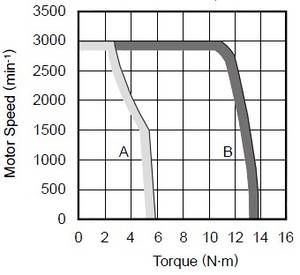 There is common belief that two servos with the same power range from different manufacturers are roughly equivalent and that the only other significant comparison point is price. That isn't true, and information here will debunk that belief. Important features you cannot afford to ignore when comparing servos include:

A servo's torque range is divided into two categories: continuous and intermittent duty (see Figure 1). The continuous duty range represents the torque the servo can deliver 24/7 without overheating or otherwise damaging the motor. The intermittent duty range refers to the set of torque values the servo can deliver for only short bursts of time. These bursts are typically used for acceleration, deceleration, and dealing with brief load disturbances.

Unfortunately, torque and speed ratings are not consistent throughout the motion control market. The amount of time a servo can continue to deliver torque in the intermittent range (sometimes referred to as the overload time) varies widely among servo manufacturers and is not always clearly specified. This feature alone can make a significant difference in the types of tasks a servo system can perform. When sizing a servo, remember that the RMS (root-mean-square, or roughly speaking, the average) torque requirements must be in the continuous duty range for the servo to operate without overheating. The duty cycle of a servomotor is limited by the heat it can dissipate. 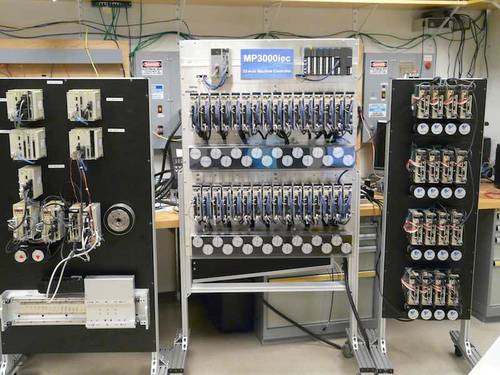 A test was conducted on an end user's machine between two brands of servos with roughly the same outer dimensions (see Figure 2). Although their physical sizes were almost identical, their power ratings differed—one was rated at 750 W and the other at 860 W. After multiple tests of the machine's operation, it was concluded that the 750-W motor clearly performed better for this application.

The result seems counterintuitive without understanding that rated torque values are not measured at the same speeds for all servos. The equation for the power of a motor is expressed in terms of both torque and speed, and neither have standard rated values for servos in the motion control industry. It is therefore critical to select a motor that has the required torque at the machine's operating speed and to not fixate on the power rating. A servomotor's internal stator windings can be wound to provide more speed and less torque or more torque and less speed at the same wattage.

So far, only torque, speed, and power have been discussed. Inertia is another very important specification to consider when selecting a servo. The ratio between the servomotor's rotor inertia and the inertia of the load (the load coupled to the motor's shaft) is critical.

By definition, a servo is a closed-loop system, and its control algorithms are constantly changing the current in the motor. The current sent to the motor is based on complex calculations that involve the differences between its feedback and its commanded values for position, speed, and torque. The inertia ratio between the motor and the load will significantly affect the servo system's ability to accurately control the motor. If the ratio is too high, the motor will overshoot its target and cause oscillations. These oscillations can be minor, such as a slight wiggle when the motor stops, or major, such as violent and loud vibrations that can damage the machine.

High-performance servomotors available today have low-inertia, permanent-magnet rotors and can provide a large amount of torque in a small package. It is important to select the proper mechanical transmission (such as a gearbox, ball-screw, or belt-and-pulley) to achieve a load-to-rotor inertia ratio within an acceptable range:

Another important factor is the resolution of the feedback device. Encoder resolution is constantly rising. It is not uncommon for encoders to have 20-bit—or greater—resolution. A 20-bit encoder has more than 1 million pulses per revolution (220 = 1,048,576).

While this may seem like overkill, remember the purpose of a servo is to determine the difference between commanded and actual positions and to drive that error value to zero. The higher the resolution, the faster the servo system can detect the movement and make a correction, resulting in more stiffness and tighter control of the load.

The servo system's ability to calculate and deliver current—and therefore torque—in real time can be another area where servos vary greatly. The frequency response of a servo is a measure of its ability to follow changes in the command signal.

A servo's bandwidth is defined when a sinusoidal signal is commanded into its speed loop, and the frequency of the sine wave is raised until the servo cannot change the shaft speed to match the commanded signal. When the actual speed falls to 70.7% (-3 dB) of the command signal, that frequency is measured as the bandwidth. Over the last 24 years, the speed loop bandwidths of high-performance servos have increased tenfold from levels below 100 Hz to those now exceeding 1 kHz.

Along with advances in power, there have been many improvements in servo system controls. Most modern servo systems have network-based architectures, which lower implementation costs and improve diagnostic capabilities. The reduction in wiring also increases the speed at which OEMs can commission multi-axis systems, resulting in higher profits and greater throughput. Network connectivity for both servo system control and for handling information between the factory manufacturing execution system (MES) and SCADA system is an absolute must in this age of increased communication. The added diagnostic capabilities can reduce downtime and allow for remote resources to quickly troubleshoot problems.

As servo performance has increased, the size of the electronics in the amplifier and controller has decreased. Thermally efficient designs require less space between amplifiers. These advances help shrink the footprint of the electronics, which results in significant cost savings for the overall system. Smaller control cabinets and the resulting real estate savings can be used to create a more efficient use of the factory floor.

Of course, the aforementioned features are of little benefit if the system suffers from inferior quality. It is important to choose a manufacturer that has a track record of great quality and the data to support those claims. Mean time between failures is a statistical measurement of the quality and reliability of a product. Asking for this information before you purchase can help you choose a motion control partner whose product offering provides a lower total cost of ownership.

There are many factors to consider before purchasing a servo system. When comparing servos, remember that the criteria for determining true value goes far beyond wattage and price.

- Jerry Tyson is the southeast regional motion engineer for Yaskawa America Inc. He has 26 years of experience in the motion control industry and has worked for Yaskawa for 25 years. He has a BSEE from Georgia Institute of Technology.

Michael Miller is the regional motion engineering manager at Yaskawa America Inc. where he has worked for 16 years. He has a BSEE from Kettering University.

- Other articles from the supplement will be linked below, when posted.