The increase in variable frequency drive (VFD) installations across the globe has meant that drives are being applied in more challenging system environments.Not only is the environment challenging, but drives also have a few inherited issues that can limit the overall system performance.

International standards have helped guide system integrators to make the correct choices for equipment inside their systems. These choices help to eliminate problems such as electromechanical interference and harmonic noise at the input of the drive; as well as voltage spikes and short-circuit and interference currents at the output. Each of these issues should be taken into consideration during the design phase to increase overall system efficiency during operation.

When many electrical systems are installed in the same area, the equipment in the network begins to interfere with each other. This is often referred to as electromechanical interference, or EMI. This can lead to many problems within the network, including eventual equipment damage. These are risks that many applications such as datasystems, hospitals, and schools cannot afford.

Many integrators are turning to the simplest and cheapest solution, an EMI filter. These filters have a small footprint and are easy to install. They are installed on the line side of the drive system to help suppress the unwanted high frequencies associated with crowded networks. International standards such as International Electrotechnical Commission (IEC) 61000-6-4 have set guidelines for the acceptable levels of EMI in industrial systems. Integrators need to be aware of these guidelines and select components appropriately.

The problem of harmonics 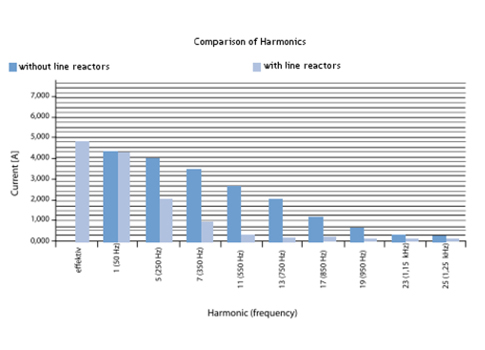 Harmonics are present in every drives application. Harmonics are created by nonlinear loads like VFDs. The non sinusoidal currents present in all drives using diodes or switching devices on the input may lead to harmonic currents in the system. Harmonic currents can cause a number of issues in systems such as component overheating, reduced power factor, and equipment malfunction.

The reactor itself is just a simple inductor with a specific amount of impedance. Adding impedance to any system will help to mitigate harmonics in every situation. International standards such as the IEEE 519 and IEC 610003-2 should be referenced before installing any industrial or commercial VFD system. The simple addition of a line reactor will improve the overall system efficiency, decrease component maintenance cost, and increase the system equipment lifetime.

The output of VFDs sometimes causes issues that can lead to increased motor stress and increases in system downtime. A common problem at the output is voltage spikes. The switching devices inside the drive turn on and off very quickly, causing resultant voltage spikes greater than the rated voltage of the motor.

Depending on the cable length between the drive and motor, the peak voltage can often be greater than 1,200 V in a 480V system. The longer the cable length, the higher the voltage spikes. These spikes will eventually cause deterioration of the motor insulation and motor winding failures. Certain applications require long cable lengths due to the environment of the system installation.

The formula dV/dt represents the instantaneous rate of voltage change. System integrators are turning to dV/dt filters to help mitigate voltage spikes in their VFD systems. These filters are installed at the output of the VFD, in front of the motor in the system. The dV/dt filters suppress the voltage spikes to limits that the motor can better manage. The increased motor protection will lead to an increase in overall motor lifetime, and a decrease in equipment downtime caused by the damage from the voltage spikes.

Like the line reactor and EMI filters on the line side, dV/dt filters are simple to install and are inexpensive, especially when compared to the cost of replacing damaged motors. Most commonly, these filters are used in applications with harsher environments such as oil and gas, mining, and marine.

Another common problem found at the output of the VFD system is the presence of differential-mode and common-mode currents. These are distortions in the output current of the VFD, often referred to as asymmetric and symmetric, respectively. Like voltage spikes, the current distortions exist because of the fast switching devices in the VFD. Current distortion has a negative effect on the motor, causing audible noise, higher losses in heat, as well as overheating when it is ignored.

There are several common solutions to mitigating these current distortions. Focusing on the simplest and the most cost-effective options, the load reactor is a formidable solution. Load reactors are installed at the output of the VFD, before the motor in the system topology. A load reactor acts in the same manner as a line reactor; in fact, many reactor manufacturers produce the same unit as interchangeable between the line and load. The reactor inductance acts to smooth the current distortion from the output of the drive, while also helping to suppress the voltage spikes caused from the drive switching devices. Consequently, motor noise and losses are significantly reduced.

For systems with longer cable lengths between the VFD and motor, such as those greater than 100 m, both voltage spikes and current distortion will be present. In these applications, sinewave filters can be utilized. These filters use an inductor-capacitor topology to achieve a sinus waveform. Combining the benefits of the dV/dt and load reactor, the sinewave filter increases motor lifetime, while decreasing noise, losses, and voltage spikes.

The benefits of all of these component solutions need to be taken into consideration when designing a drive system. Careful preparation during the design phase will reduce the likelihood of future costly system repairs and possible retrofits. Applying any of these five common solutions at the input or output of the VFD will increase the overall system efficiency and the lifetime of system components. Many manufacturers provide these solutions. It is the responsibility of the system integrators to make sure that the proper components are installed.

Alex Ward is a technical sales engineer for Indianapolis-based REO-USA, which engineers and manufactures power conversion components for the VFD industry. His email isaward@reo-usa.com.

Here are some of the articles at www.plantengineering.com, KEYWORD: HARMONICS that further discuss this topic:

The critical question is: When do harmonics in electrical systems become a significant enough problem that they must be mitigated? Operational problems from electrical harmonics tend to manifest themselves when two conditions are met: Generally, facilities with the fraction of nonlinear loads to total electrical capacity that exceeds 15%, and a finite power source at the service or within the facility power distribution system with relatively high source impedance, resulting in greater voltage distortion resulting from the harmonic current flow.

Moving harmonics out of harm's way

Are harmonics refusing to jibe with the harmony of a facility's power flow? In the old days of predominantly linear loads, harmonics were a natural occurrence that didn't cause problems because with normally balanced, three-phase AC systems that have non-distorted waveforms, the harmonic currents got cancelled out.