Multi-phase ac induction motors have traditionally dominated the electric motor industry. The industry has improved overall motor efficiency in each subsequent NEMA-MG 1 motor standard revision. To make sense of motor efficiency, one must understand what efficiency losses are attributed to.

Electric motor driven systems represent more than a third of the total electricity demand for the United States and between 43% and 46% globally, according to the International Energy Agency.

Total motor energy usage for the industrial sector outstrips commercial usage by roughly 3:1. Of total power used by motors worldwide, approximately 68% is used by medium-sized motors from 1 to 500 hp, which covers the vast majority of motors used in building systems. 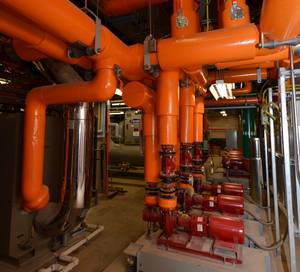 To make sense of motor efficiency, one must understand what efficiency losses are attributed to. Motor losses can be assigned to four major categories:

Of these losses, I2R losses dramatically outweigh the other categories. I2R losses manifest themselves as increased heat, so by addressing these, other losses such as cooling fan motor losses in TEFC designs can be indirectly affected.

In most applications, operating cost dramatically outweighs the cost of the motor itself during its useful service life. Unfortunately, in typical building systems we typically size motors to accommodate the worst-case loads, which generally represent a very small percentage of total operating hours. If that motor were to run at full speed, regardless of the load, an incredible amount of power would be wasted. However, through the affinity laws, we know that power varies in relationship to speed by the following formula for centrifugal loads:

Based on this formula, if a load can be accommodated by a slower speed, you can dramatically reduce the power that the motor needs to produce.

To illustrate this relationship, let’s apply this concept to a simplified load profile using a 7.5 hp, 1800 rpm motor (see Table 1). If the average speed required by our theoretical load was of 75% of full load speed, the average power required would be 3.16 hp. Using equipment costs from an online electrical distributor specializing in induction motors and VFDs, and defining a few variables including electrical cost per kWh and hours of operation, we can get a rough comparison of the cost of the equipment compared to the energy cost and the return on investment.

All induction motors have a base speed (synchronous speed) that is directly proportional to the quantity of magnetic poles in the motor's design (generally between 2 and 8) and the frequency of the electrical source (60 Hz in North America):

However, the speed of the rotor always slightly lags the speed of the rotating magnetic field in the stator—it's always trying to catch up. That difference between the synchronous speed and that actual speed of the rotor is known as “slip.” Reductions in the resistance of the stator and rotor reduce I2R losses but also result in less slip. Unfortunately, slip is directly related to the amount of torque that a motor of a given design can produce. As such, high inertia loads with greater starting torque requirements generally necessitate NEMA motor designs with lower efficiency. (See Table 2 for NEMA design designations.) Stator designs with lower I2R losses also typically have higher locked rotor current.

The overall efficiency improvements to this point in time have been limited to optimizations and not revolutionary changes in existing induction motor designs. The greatest recent jump in industry motor efficiency is attributed to EISA-2007 mandating NEMA Premium motor standards for all general-purpose, 1- to 200-hp, 3-phase motors rated to 600 V.

While even greater efficiencies are possible, the improvements up to this point have been incremental and, if anything, will only start to level off without dramatic changes in the basic motor design. For example, the difference in efficiency between EPAct compliant and

NEMA Premium motors is generally only 1% to 3% (see Table 3). These diminishing returns would suggest that if major increases in system efficiency are desired, other motor technologies should be entertained, or more importantly, other elements of the system such as control by VFDs should be more greatly emphasized.

How do you improve efficiency in VFDs?

You can't consistently quantify efficiency if there's no industry-wide standard to measure it. Losses in VFDs are generally attributed to conduction (electrical current flowing through the device) and switching losses (the power lost by switching the transistors on/off during operation of the VFD's input rectifier and output inverter sections). Theoretically, VFD manufacturers can address efficiency by optimizing these aspects of the VFD’s design. In general, most manufacturers will quote mid-90% efficiency for their newer VFD designs.

Although a VFD manufacturer’s quoted efficiency can allow for a ballpark efficiency estimate of motor-VFD system, numerous variables can impact actual system efficiency. Examples include variables such as the carrier frequency at which a motor is operated or the NEMA design type of the motor being used.

Ultimately, until the appropriate standards are developed, increasing system efficiency is best addressed by focusing on the fundamentals:

The energy savings associated with properly addressing these load management concepts overshadow the few percentage points of efficiency that may exist between different manufacturers’ VFDs. However, it's inevitable that VFD standards will eventually be developed similar to those currently in place for induction motors.

John Yoon is the senior staff electrical engineer for McGuire Engineers. He has 20 years of experience in the design of electrical distribution systems.