In a typical wastewater treatment plant, aeration blowers are the largest single consumer of energy. One of the major energy efficiency improvement areas appears in changing the way by which air flow into aeration basins is controlled, from flow control valves (FCV) to blowers speed control by a variable frequency drive (VFD). Results show up to 50% energy savings.

By: Shady Yehia, The Control Blog

A typical sewage treatment process consists of three major stages: (1) a mechanical treatment stage, (2) a biological treatment stage, and finally (3) a chlorination and filtration stage; variable frequency drives (VFDs) may be used at every stage. Biological treatment is the most critical part as this is where aerobic bacteria is allowed to consume the organic matter in the sewage. This takes place in the aeration basins where the bacteria is forced to multiply and grow at highly accelerated rates by increasing the amount of oxygen available in the water, and thus, blowers are used to blow air into the aeration basins.

For the aerobic bacteria to do its job, it needs two resources, air to breathe and multiply and organic matter, or food, to consume. When aeration blowers are delivering air into the basins, the result is present in the form of increased dissolved oxygen (DO) in the water. The optimum range of DO in aeration basins is decided based on the characteristics of the sewage influent, size of the aeration basin, and the sewage flow rate. 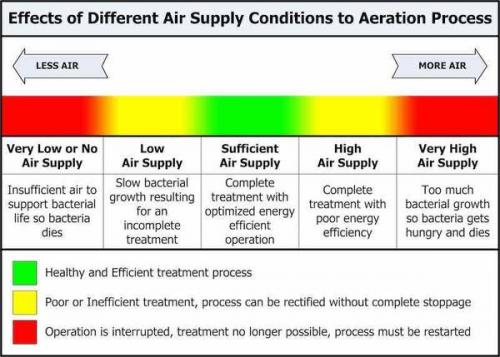 As Figure 1 explains, it is critical to give just the right amount of air to the aeration basins; less air will result in slowing the growth rate of the bacteria, and the existing bacteria will be unable to consume the entire organic content flowing through the aeration basin, resulting in incomplete treatment. If even less air is introduced, or no air at all, the bacteria will consume all the DO in the basin and die. In this case, the sewage treatment process stops until the process is restarted and bacteria is built up again, a procedure that can take up to few weeks.

On the other hand, too much air also is not good, even though more than enough air will ensure sufficient bacterial growth; the operation will not be energy efficient. Moreover, if excessive air is injected into the basins, bacteria will grow beyond acceptable limits, organic matter in the basin will be consumed too quickly, and the bacteria will starve and die, also halting the process. 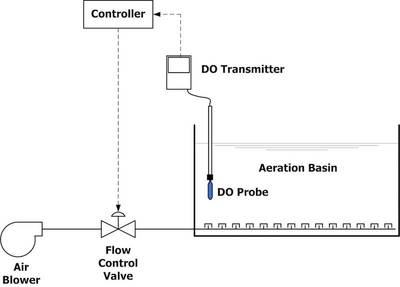 Typical aeration control strategy is based on a proportional, integral, derivative (PID) control loop. The controller can be a programmable logic controller (PLC), a distributed control system (DCS), or even a stand-alone PID controller.

A traditional loop shown in Figure 2 uses a DO probe and transmitter combination to measure the amount of oxygen existing in the basin; compare it to the DO set point (usually between 2.0 to 4.5 ppm) and calculate the required control output, which is applied to the flow control valve to regulate the amount of air flowing into the tank and thus changing the DO in the basin.

This methodology has proven capable of maintaining the DO value within acceptable limits, yet it fails to answer to the low-energy-consumption requirements of modern plants, and so, variable frequency drives find their way into the aeration control as a more efficient alternative to the traditional flow control valves. 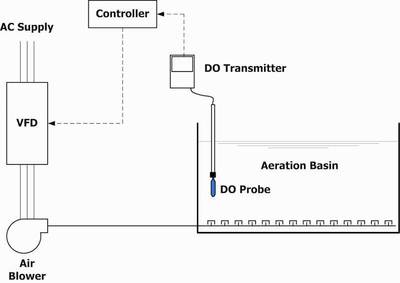 When implementing this strategy, flow control valves are removed from the system, the VFD, usually supplied as an integral part of the motor control center (MCC) of the plant, receives the output signal of the controller (usually 4-20 mA) and in turn changes the speed of the air blower. Figure 3 illustrates this strategy.

Energy savings by using a VFD is derived from the laws of Affinity that state: 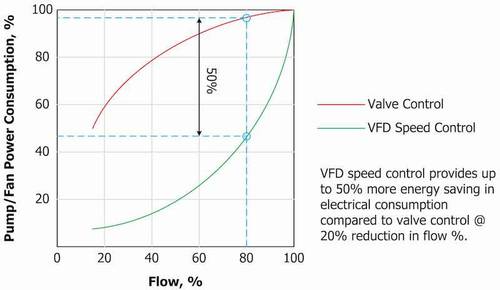 Applying the low affinity to the power consumption curve of a centrifugal fan or blower shows the amount of energy that can be saved at the same operating point of the flow control valve strategy; Figure 4 shows energy saving of almost 50% in response to a 20% reduction in flow rate. The same rules apply to positive displacement blowers but with lesser savings, yet the savings cannot be neglected.

Other than the obvious benefit of energy saving, which provides a return on investment (ROI) of 6 to 18 months depending on the plant, application of VFD in aeration control provides the following additional benefits: 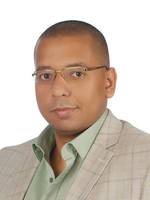 Implementing VFD aeration control strategy has benefits in multiple areas of plant operation; it saves energy, improves the process control, enhances the plant power factor, and reduces maintenance costs. Such benefits cannot be neglected, especially when energy costs are rising and the operational criterions are tight.

- Shady Yehia is the founder and author of The Control Blog and is the instrumentation, control, and automation proposals and engineering manager in a process technology integration company based in Qatar and operating in the EMEA region. The Control Blog is a CFE Media content partner. Edited by Joy Chang, digital project manager, Control Engineering, jchang@cfemedia.com.