A college’s decision to use reclaimed water lieu of a cooling tower saves millions of gallons of drinking water each year. 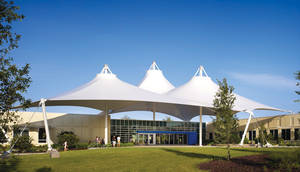 Eckerd College in St. Petersburg, Fla., regards its surroundings as a living, breathing classroom and a laboratory for conservation and sustainable practices. From its inception, Eckerd has been committed to educating students about ecological and environmental stewardship. The college employs positive environmental landscape practices, such as landscaping with native plants, natural and permeable pedestrian path and parking surfaces, and stormwater management via ponds and wetlands to filter storm runoff. The campus has a recycling program, a composting program, an “eco-clamshell” food container reuse program, a car-sharing program, and a bike-sharing program that earned Eckerd special Campus Ecology Recognition by the National Wildlife Federation.

Eckerd’s president signed the American College and University Presidents’ Climate Commitment in May 2007, and the college has since complied with the commitment’s requirements, including conducting a greenhouse gas emissions inventory, developing an action plan for achieving climate neutrality, and implementing an Energy Star purchasing policy. An array of solar panels was recently installed on the roof of the Environmental Studies and Behavioral Sciences buildings. The 50 kW photovoltaic system was built by SunQuest Energy in St. Petersburg, Fla.

Because it places a high priority on conserving potable water, Eckerd sought an HVAC solution for its James Center for Molecular Life Sciences building that did not include a cooling tower. Cooling towers reject heat by evaporating tap water, and a conventional cooling tower for the James Center would evaporate 7.5 million gal of tap water per year. Another solution—an air-cooled chiller—was considered, but although less expensive, air-cooled chillers are also less efficient and last only about 12 years in the salty, humid air on the Florida coastline. Instead of a cooling tower or an air-cooled chiller, the college ultimately selected a solution that uses “reclaimed” nonpotable water for cooling.

Reclaimed water—water that has undergone a multistage treatment process but still retains nitrogen and phosphorus elements that act as fertilizers—is an integral part of St. Petersburg’s water conservation strategy. The city’s water reclamation system, the first built in the U.S. and one of the world’s largest, provides more than 37 million gal of reclaimed water per day to over 10,600 customers, primarily for lawn irrigation. Continued expansion of the reclaimed water system has significantly reduced demand for potable water. 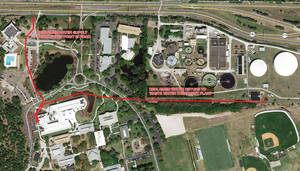 A building like the James Center is usually cooled by circulating chilled water through coils inside air-handling units to absorb heat from the building’s air. When the water returns to the chiller, it is warmer. The chiller cools the water back down by transferring the heat to water in a separate condenser loop by means of a refrigerant cycle. Heat must then be removed from the condenser water.

There are many ways to cool the condenser water, but the most common way is to circulate it through a cooling tower. The condenser water is pumped to the top of the cooling tower and released evenly over expanses of corrugated metal or fiberglass “packing” inside the tower to maximize evaporation. A fan at the top of the tower draws air up through the tower, which causes some of the water to evaporate into the atmosphere. The evaporation cools the remaining water, which collects at the bottom of the tower and is recirculated. To keep a constant volume of water in the condenser loop, the evaporated water needs to be replaced, usually with tap water. The conventional cooling tower approach would consume 7.5 million gal of tap water over the course of a year to replace the evaporated condenser-loop water.

An evaporative cooling tower needs to be replaced periodically because the corrugated metal or fiberglass packing degrades over time. A salt-air environment like St. Petersburg’s accelerates this degradation. The average life of a cooling tower in the city is 7 to 10 years—a major expense that Eckerd College was eager to avoid.

Rather than using a cooling tower, the James Center’s cooling system rejects heat to St. Petersburg’s reclaimed-water supply. From the 20-in. reclaimed-water main beneath the Pinellas Bay Way, a 12-in. main carries reclaimed water directly to the James Center, where it is piped to two stainless-steel plate-and-frame heat exchangers in the chiller room. Inside the heat exchangers, heat from the condenser water loop is transferred to the reclaimed water, and this heated reclaimed water is returned to the storage tanks at the treatment plant.

Reclaimed water is sprayed on lawns all over St. Petersburg. To protect customers, the city maintains tight tolerances on the water’s chemical properties, including pH, nitrogen, phosphorus, and chlorine concentrations. Because the James Center returns the reclaimed water downstream of the city’s chemical treatment processes, the city needed assurances that the chemical properties of the returned water would not be altered in any way. Accordingly, the city included a phrase in the original contract stipulating that the college would ensure that the returned water was neither filtered nor chemically treated and that its temperature would not exceed 95 F.

The cooling system was designed according to the city’s estimate that the temperature of the reclaimed water supply varied between 72 and 82 F over the course of a year. To achieve full cooling capacity, the system needed to heat the reclaimed water by at least 10 F. Heating the water by 10 F in the expected supply temperature range of 72 to 82 F would result in a return-water temperature no higher than 92 F. However, when the system was brought online, the water temperature in summer was consistently measured at 86 F. Heating this summertime water by 10 F would bring it to 96 F, which would exceed the 95 F limit.

To allow a full 10 F heating in summer, the return-water temperature limit was renegotiated to 100 F. The building’s Daikin McQuay magnitude magnetic bearing centrifugal chillers are easily adapted to this modification to operating conditions. 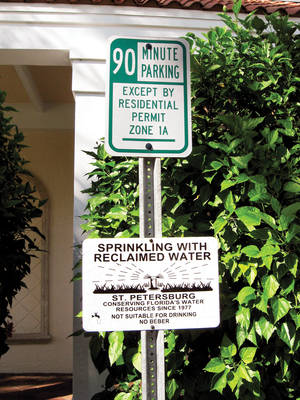 To compensate the city for the additional electricity required to circulate the reclaimed water through the Eckerd College campus, the college is billed based on the electrical consumption at the city’s pumps. It is a rate lower than that paid by reclaimed-water customers because the reclaimed water is not consumed but merely heated and returned to the plant.

Keeping the pressure on

For most of the year, St. Petersburg provides reclaimed water at a pressure of 60 psi, which is more than adequate to push it through the piping, valving, and heat exchangers in the James Center and back to the plant. During periods of drought, however, the city significantly reduces the pressure on the reclaimed water supply. At these times, variable-speed booster pumps within the James Center increase the pressure in the reclaimed-water circuit to keep the chiller plant in operation.

During construction, pressure surges were observed in the reclaimed-water piping system that were strong enough to shake the piping and components in the mechanical room. CannonDesign worked with the city to model the hydraulics within the reclaimed water system and find the cause of the anomaly. Investigation revealed that the pressure surges were the result of booster pumps tripping out at one of the wastewater treatment plants. To manage the pressure fluctuations and protect equipment, a bladder-style surge tank was piped to the reclaimed-water main entering the building.

Eckerd College and the city of St. Petersburg have found an innovative new use for the wastewater treatment plant’s reclaimed water. A number of factors made this solution possible: the physical proximity of Eckerd College to the wastewater treatment plant, the presence of a high-performance variable-speed magnetic-bearing chiller in the building to accommodate the revised return-water temperature limit, and, most important, Eckerd College’s commitment to environmental stewardship and the city’s willingness to team with the college. The resulting chilled-water plant saves millions of gallons of drinking water every year, and the energy savings provides an 11-year payback over the air-cooled chiller alternative.

Raymond Schultz has more than 20 years of experience and provides senior leadership and oversight for health care and educational projects with CannonDesign. His experience includes all facets of mechanical systems, from heating and cooling plants to distribution and terminal units. Frank Smaak has significant experience in mechanical system design for new construction and renovation of commercial, educational, and institutional projects, focusing on design of low-maintenance, energy-efficient HVAC systems for buildings. As a member of CannonDesign’s mechanical engineering group for more than 25 years, he has been responsible for the mechanical design of more than 1.5 million sq ft of research laboratory facilities and is especially versed in selecting appropriate energy efficient HVAC systems for them.