When choosing a tuning strategy for a specific control loop, it is important to match the technique to the needs of that loop and the larger process. It is also important to have more than one approach in your repertoire, and the Cohen-Coon method can be a handy addition in the right situation.

The well-known Ziegler-Nichols tuning rules work well only on processes with very long time constants relative to their dead times, and on level control loops. However, its performance is not good on flow, liquid pressure, and many other loops that require fast adjustment. In contrast, the Cohen-Coon tuning rules work well on virtually all self-regulating processes and were designed to give a very fast response.

The method's original design resulted in loops with too much oscillatory response and consequently fell into disuse. However, with some modification, Cohen-Coon tuning rules proved their value for control loops that need to respond quickly while being much less prone to oscillations. 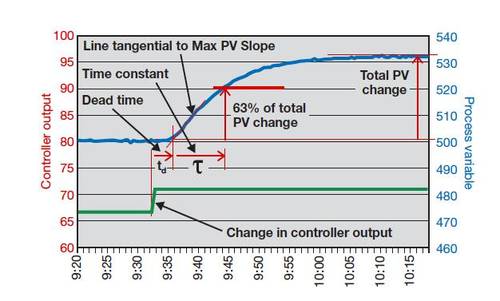 Cohen-Coon tuning rules have been designed for use on a non-interactive controller algorithm such as that provided by the Dataforth MAQ 20 industrial data acquisition and control system. There are controllers with similar characteristics available from other suppliers.

To apply modified Cohen-Coon tuning rules, follow the steps below. The process variable and controller output must be time-trended so that measurements can be taken from them.

1. Do a controller output step test: 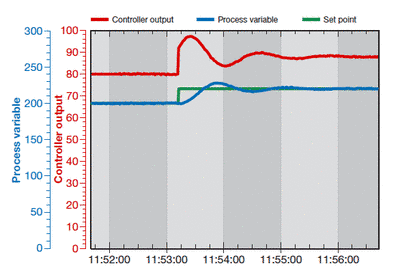 4. Calculate controller settings for a PI or PID controller using the modified Cohen-Coon equations below. (The modified rules calculate the controller gain as ½ of that calculated by the original rules.)

5. Enter the values into the controller, make sure the algorithm is set to non-interactive, and put the controller in automatic mode.

6. Change the setpoint to test the new values.

Do fine tuning if necessary. The control loop's response can be slowed down and made less oscillatory, if needed, by decreasing KC and/or increasing TI.

Lee Payne is CEO of Dataforth.

To learn more about PID, look for additional application notes at the Dataforth website: www.dataforth.com

Read more about PID control and loop tuning below.