Scotty’s “Captain, I’m giving you all she’s got,” tells Kirk that he’s reached maximum output. The same thing can happen in your production unit. What results depends on the nature of your process.

A recent Real World Engineering blog post described a problem situation that is probably pretty common. The discussion cited a plant with an induced draft blower on a regenerative thermal oxidizer (RTO). The problem was that anytime the plant operated the blower, it invariably ran at full speed with a howl that disturbed residents living anywhere near the plant.

The situation wasn’t because the blower had no speed control. On the contrary, it had a VFD that seemed to be stuck at maximum. The author pointed out that the problem wasn’t with the VFD, it was with the control system. The blower was regulated by a controller that was supposed to modulate the speed according to the demands of the RTO. The troubleshooter found that the installer had never tuned the loop and had carelessly left the setpoint set such that the controller was demanding a greater volume of air than the blower was capable of delivering even running at full speed. 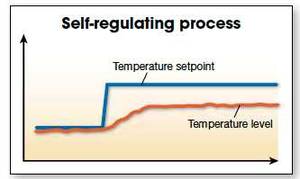 In control loop terms, that blower is described as saturated. It’s doing the best it can, but it cannot move the process variable to the setpoint. Such saturated conditions are not all that hard to find, particularly as a company tries to push more production out of a given process. That control point in the process becomes the bottleneck or the limiting factor for production from that unit. If you’ve ever run out of hot water because too many people want to take showers at the same time, you have saturated your hot water heater. The burner may be turned on full blast, but it can’t keep up.

Once some process element is saturated, the result will depend on the general nature of the process. Some processes are characterized as being self-regulating. This means that it will eventually settle in some sub-optimal state, but it will still operate. The blower still pulled air through the RTO, and your shower still works, although probably colder than you like. Self-regulating processes can be identified in the control room by looking at the traces on the display. While the process variable won’t reach the setpoint, it will settle at some point and run more or less in parallel to the setpoint. 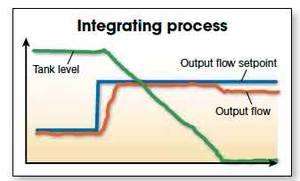 Other processes are called integrating (aka non-self-regulating), which means that they can only operate for a limited amount of time when out of control before a specific problem emerges. The classic example of an integrating process is a storage tank. If the input to the tank is greater than the output because the output valve is wide open (saturated), it’s only a matter of time until it overflows. Similarly, if the output is greater than the input because the valve filling the tank is wide open (again, saturated), eventually the tank will be drained empty. Integrating processes can be identified in the control room when the process variable continues to diverge from the setpoint.

Saturated control elements can make a process difficult to control. When a valve, pump, heater, or some other device reaches the end of its scale, that device becomes the primary control element. If the process was not designed with the idea of having that device in such a role, you’re stuck. Your best choice may be to dial everything back until there is some headroom. In the long run, such devices should be replaced with something sized more appropriately. Over time, the weak links of the chain can be eliminated, resulting in a process that can operate comfortably at the desired output levels.

Peter Welander is a content manager for Control Engineering. pwelander@cfemedia.com

Learn more about how a saturated controller causes "reset windup" in a PID control loop.