Calculating your efficiency will point the way to the right decision

A generation ago, when a large industrial motor neared the end of its service life, the debate about repairing or replacing it was usually pegged to the magic number of 57. This was a number derived by purchasing agents, based on the residual value of a run-out motor plus repair cost, versus the cost of a new motor and the delay in getting it into service.

If the motor could be repaired for less than 57% of the price of a new one, it was repaired; if the internal damage was extensive and repair cost was going to exceed 57%, the agent ordered a new motor. That was then.

This is now: Energy costs are greater, motor efficiency can be greater, and repair technology is much improved, resulting in little or no loss of motor efficiency after a rewind. (In fact, when rewinding an older “pre-EPACT” stator, a service center can actually improve efficiency on larger horsepower units.) For ac motors particularly, the repair/replace choice has become complicated—especially for medium and large motors that run for an intermediate or high number of hours per year. Complicating the issue is the fact that there are three categories of induction motors: standard, first-generation energy efficient (EE), and current EE motors. In the real world, they are often used interchangeably.

Motor circuit evaluation (MCE) testing provides a heads-up when a motor is nearing the end of its useful life. If the megohm (commonly called “megger”) part of the test shows resistance to ground is less than 100 ohms, the motor is nearing the end. Surge testing tends to back up results of the megger test if surge patterns are uneven. Hi-pot testing is a go/no-go test in that it is destructive to windings; a motor that fails a hi-pot test is no longer serviceable.

It’s easy to show that, for motors that operate nearly continuously, in choosing between repairing a standard unit and buying an EE motor, the new motor wins hands down because it will pay for itself in a few years. What is less clear is choosing between the repair of an existing EE motor or replacing it with a new one—or making the same choice between two standard motors that operate for fewer hours.

Only at the lower end of horsepower range, below 40 hp, and low operational time does the old 57% rule still apply.

In simplest terms, EE motors are made more efficient by tightening manufacturing tolerances and packing more conductor into the motor to reduce internal losses. Likewise, repair technology has become more precise, too, and the degradation of efficiency that was common in a motor rewind has been cut drastically. Now, repair shops can rewind a motor to its original nameplate efficiency and, in certain circumstances, improve efficiency. This applies to both standard and EE motors.

Obviously, the cost of a rewind can vary with the degree of internal damage, but a typical price for a 100-hp induction motor that we will use as an example is between $2,500 and $2,700—or $2,600 average per IPS Washington Service Center price guidelines.

High hours: When a motor operates more than 4,000 hours per year, the cost of energy becomes the overriding factor in the repair/replace decision. Like a high-mileage vehicle, the cost of “fuel” quickly outweighs the cost of vehicle, and a repair/replace decision becomes a matter of choosing the solution with the greatest efficiency (see Figure 1). Typical applications are those devices that operate almost continuously, including large compressors, petrochemical pumping stations, crushers, feedwater pumps, paper machines, some metal extruders, plastic film lines, saw mills, rolling mills—or just about anything that operates for three shifts. 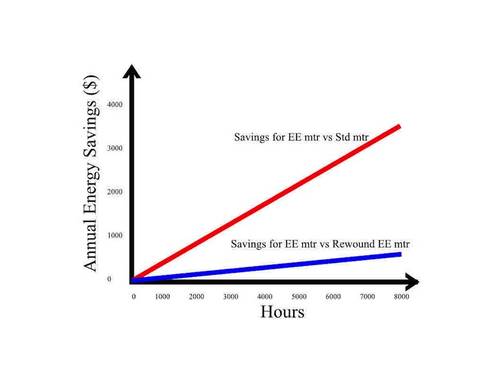 The example of the 8,000-hr, 100-hp motor in the figure illustrates the logical choice: According to NEMA projections, a 1% increase in efficiency will save $695/year at a power cost of $0.10/kWh, the rough national average in both the US and Canada. The difference between standard and EE motors of this horsepower is about 4%, so the savings would be $2,780/year. A new EE motor costs around $8,800. Cost of a “typical” rewind is $2,600. So, projected over a 10-year life span, the savings in energy alone dictate the choice to buy a new EE machine.

Intermediate: In the mid-time region—those motors that operate up to 3000 hours per year—the decision to repair or replace may be determined by your location. That is because the cost of power varies around the country, from a little over $0.05/kWh to over $0.13/kWh. The examples cited here are based on national average, but power costs that are 30% higher than average call for different thinking.

Low-time: For low-time motors—those with annual operating hours of less than 1500—the choice is much the same as it was in the past. If a rewind is going to cost more than 57% of the price of a new unit, opt for the new machine. Examples include most motors that are used for one shift per day or less.

Unless they are unique or part of unique equipment, nobody repairs ac motors under 15 hp. The math and reasoning are simple: The minimum repair cost will exceed the 57% threshold.

The simplest way to make a preliminary repair/replace decision is to use the calculator shown in Figure 2. Here is how it works. First determine the following: 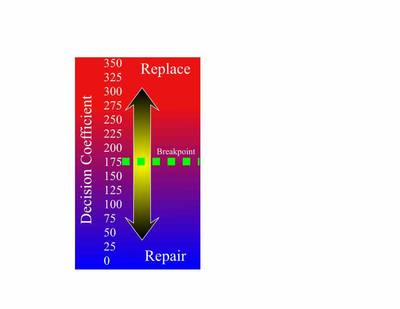 On the calculator, this figure falls well within the “repair” region. On the other hand, had the motor run another 1,500 hours and been located in an area where energy costs are $0.13, then the answer would have been right at the breakpoint.

This equation shows the overriding importance of efficiency. By simply changing the efficiency shift from 1 to 2, the coefficient doubles. Also, the equation is conservative in that it does not include an escalator factor for increases in power costs—which, like death and taxes, are a certainty. Thus, if the calculator indicates that the repair/replace decision is near the breakpoint, the wise choice would be to replace the motor to take advantage of the new motor’s greater efficiency as power costs increase. 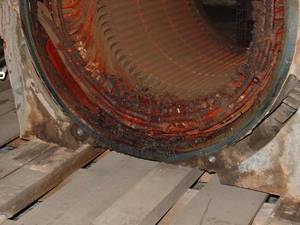 The dc machine is, as the saying goes, a different animal. Except for bearings, its wear points are different than those of ac machines and it’s much more expensive to build—by a factor of 2 to 4, depending on its design. Likewise, dc machines are somewhat more expensive to repair than ac units, but not by a factor of 4 unless the commutator and armature are completely destroyed.

Large dc machines cling to those specialized applications where extremely precise control of speed is paramount, or where it is possible to use a regenerative drive to recapture a portion of the energy already invested in the rotating mechanism. Other than that, dc technology has been shouldered aside by ac, and large dc motors have become relegated to those applications where nothing else can be controlled as precisely.

Repair/replace decisions for dc are usually simpler than those for ac because there is no premium efficiency line manufactured. Also, because the motors are more expensive to manufacture, users tend to hold onto them longer. For dc machines, the repair/replace breakpoint tends to be higher than that for ac, about 65% the price of a new unit.