Inside Machines: To properly select the appropriate servo motor for a motion control application, find the inertia of the load being rotated. Applications where the center of rotation is on a different axis than the center of mass can lead to some challenging inertial calculations. 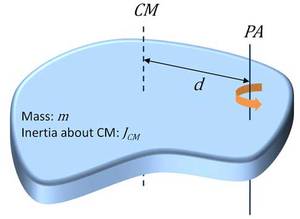 When selecting the appropriate servo motor for a motion control application, one must know the inertia of the load being rotated. Most servo motor manufacturers have software for sizing applications using basic mechanisms, such as ballscrews or rack-and-pinion. More complex systems, however, may require manual calculations. Increasingly, applications use mechanisms where the center of rotation is on a different axis than the center of mass. This can lead to some challenging inertial calculations.

The parallel axis theorem is used when a solid is not spinning about a line passing through its center of mass (CM), but instead an axis parallel to this (PA). The theorem states that for a solid rotating about an axis that is parallel to the axis that passes through the center of mass, the moment of inertia for the solid is equal to the inertia of the solid plus the mass of the solid times the square of the distance (d) of the offset axis, or: 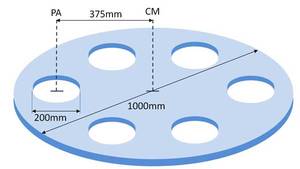 For an example of how to apply the parallel axis theorem, imagine that we are rotating a rotary table that is 1 meter in diameter, 10 mm thick, and made of steel. There are six holes cut into the table; each is 200 mm in diameter and the center of each hole is 375 mm from the center of the table.

Finding the inertia for this table is a multi-step process:

4. Final calculation: To find the final inertia value of the table, take the moment of inertia of the whole table and subtract the cutout inertia for each cutout:

The most basic moment of inertia is that of a point mass, that is, an object whose mass is assumed to occupy only a point in space. The inertia for rotating this point mass about an axis is calculated by multiplying the mass times the square of its distance from the axis of rotation, or expressed as an equation: Jpointmass=md2. It can be seen that this is the inertia that is added when applying the parallel axis theorem.

The concept of a point mass can also be applied to servo sizing. Often the table will either carry a part to be machined or some sort of tooling. Revisiting the rotary table example, assume that a mass of unknown shape is resting in each of the cutouts from the previous example. The table indexes these parts through a series of machining processes. The mass of each of these parts is 15 kg and their center of gravity is the same 375 mm distance from the center of rotation as the cutout. The moment of inertia for each of these masses can be calculated by assuming the mass is a single point:

An inspection device is mounted to an aluminum frame that does not rotate around its center of mass. The drawing shows a sketch of this mechanism.

First, the inertia for each of the side elements rotated about its center is calculated: 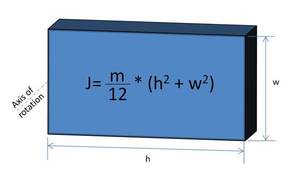 To simplify the rest of the calculations, the mass of the cross-element (5 kg) can be added to the weight of the tooling. After this, the inertia can be calculated as a point mass:

Thus, the total inertia of the mechanism is: