As part of the Machinery Production Yearbook program, IMS Research produces machinery production forecasts on a quarterly basis. Using a variety of sources, including published monthly indices and our own automation equipment market trackers, we are able to provide an up-to-date picture of the state of the industry and also to produce a highly informed forecast. This blog provides a summary review of how our projections for 2011 fared, and what our expectations for 2012 are.

Going back to January, and following what was, in the main, a very strong bounce-back in 2010, our expectations were that machinery growth would settle down to more sensible growth rates in 2011. This turned out to be the case, as growth for 2011 slowed significantly compared to the previous year. Interestingly, and despite what has been a mixed year for the world economy in general, in all of the three major regions of the world, our latest estimates for 2011 are higher than we predicted at the start of the year, as can be seen in the graph below. 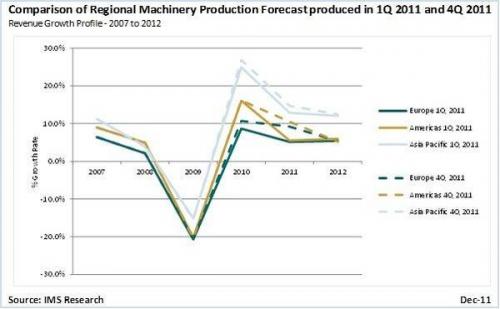 This is remarkable when you consider the extremely turbulent economic conditions we have seen throughout the year: the worsening of Eurozone debt crisis, the uncertainty in the financial markets, political wrangling in the US relating to raising its debt ceiling and the resulting downgrading of its triple-A credit rating, continued high employment, severe austerity measures and low consumer confidence. On top of all this there were other adverse effects resulting from the Arab Spring and the terrible Earthquake in Japan. The machinery market must be a robust one!

The reason for the generally strong performance appears to be coming fundamentally from remaining pent-up demand following the cancellation of capital spending throughout the credit crunch and subsequent downturn. On top of this, there is also continued growth in demand from Brazil, India, Russia and other developing markets, particularly Eastern Europe.

2011 was clearly a good year for machinery production, but what of the outlook for 2012? The problem with accurately predicting the coming year is that there are so many seemingly conflicting factors at play.

The continued growth throughout 2011 means that if monthly output now remains only level then we will still see a reasonable increase on last year. Capacity utilisation has been steadily rising, meaning there should continue to be increasing demand as manufacturers approach their maximum capacity. Additionally, companies do still seem committed to capital expenditure, particularly in the automotive sector, something that is evident from initial research performed as part of our forthcoming Capital Expenditure report. Conversely, the robustness of order books does seem to be falling from the peaks seen last year, and hanging over all of this is the general economic outlook and the continued Eurozone crisis.

On balance, we feel that the fundamentals are there to ensure a steady year of growth for the machinery sector in 2012, with world output predicted to increase 7.9% compared to 2011. However, this has to be caveated with the notion that if the Eurozone does go pop, then all bets are, of course, off.