Precise speed control of AC motors is typically accomplished with a variable frequency drive (VFD) connected to a speed or position feedback sensor. In certain situations, however, it's possible to achieve a similar level of precision speed control without the need for a feedback sensor via the high frequency signal injection method. 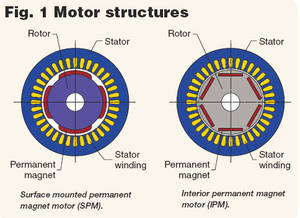 Precise speed control of AC motors is typically accomplished with a variable frequency drive (VFD) connected to a speed or position feedback sensor. In certain situations, however, it's possible to achieve a similar level of precision speed control without the need for a feedback sensor via the high frequency signal injection method. To implement this method, the VFD must use open loop control, and it must be able to inject the required high frequency signal. The method only works with salient motors such as internal permanent magnet (IPM) synchronous motors.

Figure 1 depicts two common types of permanent magnet motors. The magnets of the surface-mounted permanent magnet (SPM) motor are attached on the surface of the rotor, whereas those of the IPM motor are buried inside. Both motor types have high efficiency, but the IPM motor has additional torque because it utilizes both the magnet and reluctance torques generated by the magnetic saliency. Because the magnets of SPM motors need to be fixed on the rotor surface, mechanical strength is weaker than with IPM motors, especially in the high speed region.

As shown in Figure 2, the effective air gap in the magnetic flux path of Ld and Lq are the same in SPM motors. The permanent magnets used in motors have very low permeability and can be regarded as air in inductance calculations. As a result, Ld is the same as Lq, therefore a SPM motor has very low inductance saliency. Thus, the inductance value measured at the motor terminal is constant regardless of the rotor position. 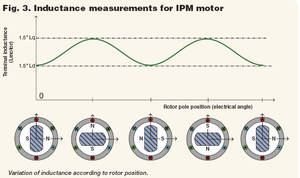 In an IPM motor, the permanent magnets are buried inside the rotor. Since the permanent magnets have lower permeability (that is, higher reluctance) than iron, the effective air gap in the magnetic flux path varies according to the rotor position. That variance is shown in Figure 3. This is called the magnetic saliency, and it results in variation of the inductance at the motor terminal according to the rotor position.

An interesting characteristic to be noted from this equation: the rotor position can be detected by measuring inductance change. This characteristic enables rotor position detection for open loop vector control, that is control without the need for a speed or position sensor connected back to the motor drive to close.

The basic concept of the high frequency signal injection method is that when a high frequency voltage is injected into an IPM motor with 0 degree injection angle (that is, through the Ld axis), the measured current will be at the highest level because of the lowest inductance. This indicates that motor impedance is at its minimum value, as shown in Figure 5. 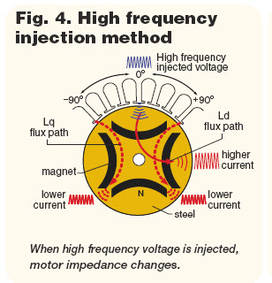 The position of the magnetic pole can thus be detected by using the saliency characteristics of Figure 5. Considering restriction in implementation, effective injection frequency ranges between 200 Hz to 1,000 Hz. 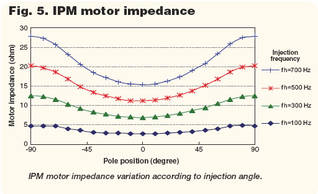 Here's how: Upon starting, a PM motor controller initially does not know the actual position of magnetic poles, so an arbitrary axis is presumed and defined as the d-axis or the magnetic pole axis. A high-frequency voltage signal is then injected on the presumed d-axis to track the actual magnetic pole position.

Advanced open loop vector control via the high frequency injection method with an IPM motor provides speed control with a 1:100 range, speed response of 10Hz and accuracy, or plus or minus 0.2%. For applications where these speed control specifications are sufficient, this method is simpler and lower in cost than closed loop control with speed or position feedback sensor.