The actual VFD enclosure cooling load during design and off-design conditions must be verified from monitoring data; otherwise, the enclosure cooling load could be substantially higher when compared with data from a VFD manufacturer. The actual enclosure-load deviation is due to the different patterns of the static and dynamic hydraulic-pressure losses in various systems. The design cooling-airflow rate (CAFRDES) will be determined based on the maximum anticipated ambient temperature (TAMB MAX) surrounding the VFD enclosure and by a manufacturer's allowable VFD enclosure maximum operating temperature (TOPR MAX).

TENT MAX = Maximum anticipated dry-bulb cooling-air temperature entering the VFD enclosure; depends on the location of the enclosure (i.e., in the air conditioned area, in the area with mechanical-free cooling, etc.)

Because VFD manufacturers allow high dry-bulb temperature and relative humidity of cooling air entering the enclosure, the moist loaded air is always present in the enclosure. As indicated by the first equation, the enclosure's total cooling load should be equal to its sensible load. However, if the VFD enclosure design's cooling-air flow rate is specified in the equations, the enclosure's optimal operating conditions can be satisfied without a moisture exchange. If these specifications aren't met, it might result in moisture deposition in the enclosure.

Figure 1 demonstrates the impact of TOPR MAX on the design relative cooling-air (RCAFRDES). The TOPR MAX varied from 104° to 122°F. This is the conservative approach, because the actual TOPR MAX might be higher due to the TEXT increase associated with heat removal caused by a greater VFD power-loss factor. Compensating for the increase in TOPR MAX will require employing an oversized VFD. The higher operating temperature of the VFD enclosure will lead to increased TEXT MAX, which can be calculated in the last equation.

TENT MAX depends on the location of the enclosure and varies from 50°F for an air conditioned area to 100°F for mechanical-free cooling with a once-through ventilation system. The top graph in Figure 1 indicates that RCAFRDES is drastically reduced when TENT MAX drops from 100° to 90°F, which coincides with VFD enclosure cooling-air temperature differentials increasing from 8° to 28°F. A further reduction of TENT MAX and the correlated increase in the enclosure's temperature differential leads to a lower reduction of the design's relative cooling-airflow rate.

Therefore, RCAFRDES could be noticeably reduced by lowering the cooling-air temperature entering the enclosure. The reduction of TENT from 100° to 50°F could lead to the RCAFRDES decreasing from 100% to 7.4% (shown in the top graph of Figure 1).

While VFD manufacturers' statistical data show how the enclosure's elevated dry-bulb operating temperature impacts VFD service life and reliability, frequency-controller electronic equipment make apparent the negative impact of moisture residing in the VFD enclosure. The conditions with no moisture exchange in the enclosure could be found from the following equations:

Equation 5 could be modified as:

Thus, equation 5 is equivalent to:

DENT and DEXT = density of the cooling-air entering and exiting the enclosure, cubic feet per pound of dry air

HRENT and HREXT = humidity ratio of the cooling-air entering and exiting the VFD enclosure, pounds of water/pounds of dry air.

The conditions of equalized entering and exiting moisture amounts in the enclosure can be achieved by varying the cooling-airflow rate. The required airflow rates to satisfy these conditions are governed by the following equations:

Given the fixed cross-section area for the particular VFD enclosure, the variation in the amount of cooling-air through the enclosure will result in respective change in the enclosure cooling-air velocity. There are three operational scenarios that have to be considered to determine the required cooling-airflow rate via the enclosure: 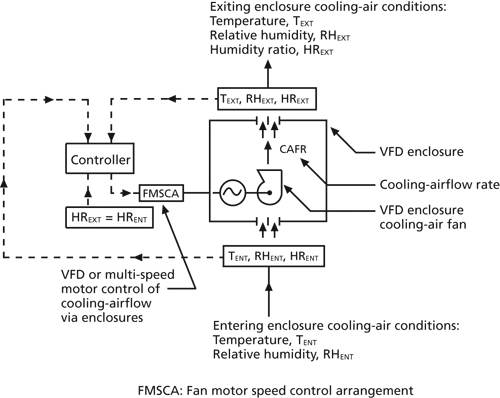 On the other hand, when the operating air temperature gets below 75°F, the overall VFD efficiency is lower due to the additional energy expenditure to maintain cooling-air below optimal conditions. The selection of the optimal cooling-air operating temperature and exiting-air humidity ratio will increase the VFD's service life and reduce its energy consumption, thus, increasing overall operational efficiency. A multispeed, cooling-air fan-motor control could also be employed to realize the system control strategy as shown in Figure 2.

Figure 3 depicts the three-way VFD enclosure's comparative control parameters with constant and variable cooling-airflow rate. In comparison, the cooling-air operating temperature, humidity ratio, and cooling load with moisture exchange are all assumed to be related to the same conditions adopted for the data gathered earlier from the monitored parameters for a 125-hp VFD servicing a secondary loop chilled-water pump.

The second set of operating temperatures in the first graph of Figure 3 represents the increased design cooling-airflow calculated using Equation 2.

The application of developed variable cooling-airflow control is advantageous from an energy-conservation point of view when compared with current control strategies It also might further benefit switchover from traditional VFD control to VFD↔VFD bypass control to reduce a system's electrical motors' overall design power demand, according to a study.

During investigations, the system was operating with constant and inadequate cooling-airflow rate, which caused protracted periods during which the magnitudes of HREXT and HRENT were not equalized, resulting in residual moisture being present in the enclosure. When the suggested control strategy -either a variable or permanently oversized cooling-airflow rate- was implemented to maintain HREXT = HRENT, there was no moisture exchange in the enclosure during design and off-design VFD operations.

Alexander L. Burd is president and Galina S. Burd is a project manager and vice president at Advanced Research Technology. Alexander Burd has 35 years of experience in the design, research, and optimization of HVAC and district energy systems with verified monitored electrical and thermal energy savings for large facilities and energy utilities. Galina Burd has more than 25 years of design and research experience in the HVAC and architectural engineering field and has co-authored many technical and research papers both in the U.S. and Europe.