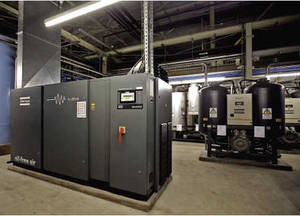 Variable speed drive (VSD) technology offers a range of benefits to operators. Because it works to meet flow demand, VSD helps plants save significant amounts of money and reduce their carbon footprint. But not all VSD technology is equal. Operators can install an external VSD to accompany a fixed-speed, base-load compressor to suit it for trim duty. The standalone drive is connected to a fixed-speed compressor and wired to the motor to adapt to the variable demand. While initially less expensive than integrated VSD compressors, external VSD equipment can cause far-reaching issues that impact compressor performance and total lifetime cost.

Inverter duty motors are specially designed to have higher cooling air flow, allowing them to run at lower speeds without overheating. These motors maintain high efficiency throughout the entire speed range while providing sufficient torque. Using a fixed-speed motor in a variable speed drive application can have a negative effect. As the speed reduces, cooling air flow will reduce according to a square of the speed reduction. Thus at 90% speed, there is only 81% flow. This can lead to overheating of the windings and a consequent reduction in efficiency and motor torque.

For example, let's take a look at a compressor motor which needs 1,000 cfm air flow for cooling. When we use a standard fixed-speed motor, we reduce the speed of the motor by 90%. The cooling flow is then reduced to 810 cfm, which could overheat the motor. When a motor overheats, the torque created may fall below the required amount. This means restricting the speed range of a standard motor, whereas inverter duty motors will maintain the required torque even down to the lower speed limit. With an inverter duty motor you can get more "turndown" and more energy savings.

As the speed of a machine is reduced, loosely mounted components may start vibrating in resonance. Resonance is caused when vibrations in one system oscillate synchronously with those in another adjacent system. In compressors, these vibrations typically occur at low speeds. To avoid vibration peaks with external VSD components, the machine manufacturers program the compressor to avoid speeds at which resonating vibrations occur. These resulting gaps in speed are known as speed windows.

Speed windows frequently cause the machine to run faster than necessary, pumping in more air than required into the pipeline, thereby increasing the net pressure. While the pressure will eventually return to normal operating levels, these fluctuations deprive the user of pressure stability, adversely affecting end-use applications.

Not only are speed windows a waste of air, they also consume large amounts of energy because of the higher than required speeds. Avoiding speed windows ensures you get maximum energy savings and constant system pressure for variable demand applications. Integrated VSD compressors operate without speed windows, allowing operators to run the compressor within its full capacity range without skipping speeds.

When connected to an inverter drive, motors can induce electrical currents. If not properly addressed, the currents will flow through the motor bearings and create pitting (damage on the bearing surface that resembles scratch marks) and premature failure. If uncontrolled, "vagabond" currents will flow from the motor shaft to the compressor shaft causing bearings to pit in the motor and compressor.

These high frequency current pulses are generated by high-speed switching and cause migration of metal from the rolling elements into the lubricant. This leads to electric discharge machining (EDM) craters and can cause premature bearing failure if no built-in protection is provided.

There are a variety of strategies for preventing bearings from current damage in integrated VSD compressors, including insulating the motor bearings, using brushes to carry away the currents and using flexible coupling without metal contact between motor side and compressor side. Armored cables can be used to carry away induced currents on the motor. Line reactors also limit the bearing current and significantly improve the drive performance and extend motor life by eliminating frequent tripping of drives.

Uncontrolled harmonic distortions cause overheating in motors, transformers and other equipment on the customer network. Control of harmonics calls for precise calculations and connection of requisite inductance coils, capacitors and reactors. Due to high-speed switching, raw output of the external VSD is polluted with harmonic distortions, resulting in package efficiency losses. Integrated VSD compressors mitigate these losses with integrated choke and necessary filtration, limiting the voltage harmonic distortion on most electrical networks.

Electromagnetic compliance (EMC) is defined by the European Commission (EC) as the "compatibility of electronic equipment within the electromagnetic environment, in which that equipment is working."

If uncontrolled, external VSD equipment will emit electromagnetic waves which will interfere with instrumentation signals and other equipment. This includes everything from surrounding machinery to pacemakers. If unprotected, the VSD is also susceptible to external electromagnetic waves. Advanced electronics and filters in integrated VSD packages minimize losses and control emissions and harmonic distortions to within the relevant EC standards. There are two aspects of integrated VSD packages that promote EMC:

Compressor drives must be engineered for maximum efficiency and turndown. The drive should be in the same skid as the compressor and not a separate component as an external VSD panel. This helps during testing prior to leaving the factory and provides the most efficient compressor compared to loose drives. The integrated design also allows for a compact footprint. Because external VSDs are a separate component, retrofitting a fixed-speed compressor requires extra space. Integrated VSD packages combine the drive and motor in one skid, saving room within the facility.

8. Link drive and compressor to controller

When the drive and controller communicate, monitoring and troubleshooting become easy and efficient. While both the external VSD and fixed-speed motor performance can be monitored separately, combining them in one package makes data gathering easier and faster, allowing operators to get a full look at compressor performance in one place. Often, these controls can be used to set the compressor to a low operating pressure; the lower the average operating pressure, the less energy consumed. Integrated VSD packages combine these features in a seamless package, allowing the compressor to operate only at the necessary speed.