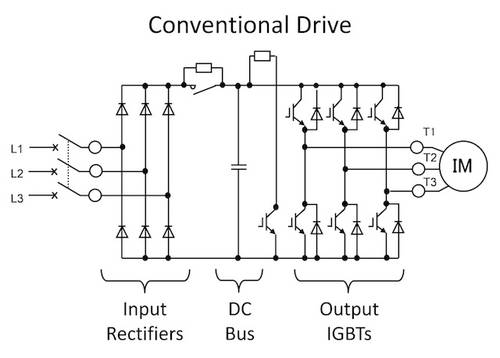 Variable frequency drives (VFDs), also known as variable speed drives (VSDs), and sometimes inverters, have benefited from many advancements since their introduction in the 1970s. During most of that time, however, the basic design of the drive remained the same, with improvements in performance, size, and cost coming mainly from advances in the drives' semiconductor components.

From the beginning, VFDs have been used to control the speed of electric motors, which consume approximately 25% of the world's electrical energy in industrial and commercial applications. By definition, VFDs enable users to operate a motor at any commanded speed, as opposed to running across-the-line at a fixed speed. This variable speed control improves energy efficiency and lessens the wear and tear on mechanical couplings, such as gears, belts, and pulleys.

Despite the advantages of energy savings and extended equipment life, VFDs at times also can have an undesired effect on electrical equipment in their proximity. By nature of their conventional design, VFDs are non-linear electrical loads; that is their input current does not follow the same sinusoidal waveform as the supply voltage. Figure 1 illustrates the cause for this non-sinusoidal current.

A conventional VFD rectifies incoming alternating current (ac) voltage to charge capacitors and establishes a direct current (dc) bus voltage level. The drive control then generates two internal waveforms—a carrier and an output. The carrier is a triangle waveform at a frequency much higher than is used to drive the motor, typically around 8 kHz to 15 kHz. The output frequency is a simulated sine wave at the frequency required for the desired motor speed. Figure 2 shows the two internal waveforms together.

The motor's inductance filters the PWM waveform so it operates on the pulses as a simulated sine wave. During operation, the VFD varies the timing and width of the pulses to provide the correct frequency to drive the motor at the speed needed for the load.

As the motor consumes energy, it draws down the dc bus charge, which then is replenished from the rectified incoming ac voltage. Although the bus voltage level varies with the load, the dc bus draws its replenishment current only at the peaks of the rectified sine wave. These current pulses, while keeping the dc bus charged and the drive operational, can lead to some problems with current harmonics.

Harmonic currents occur at frequencies in multiples of the fundamental frequency, 60 Hz in the United States. Figure 4 below shows the sum of the fundamental (first) and fifth harmonic currents. For visual simplicity, Figure 4 shows a single phase representation and only the fifth harmonic. In practice, additional harmonics distort the current waveform further, although to a lesser degree. The harmonic current (in this case 5th harmonic x 60 Hz = 300 Hz) cannot be used for real work and will be converted into wasted heat or mechanical energy. Harmonics can cause cables to overheat, circuit breakers to trip, and stress on upstream transformers. Significant current harmonics can have a negative effect on the source's ability to provide clean power, which in turn results in voltage distortion, equipment disruption, and power company fines. 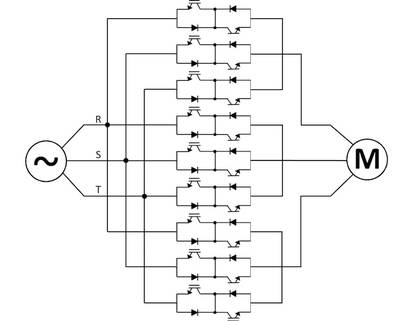 A relatively new VFD design, on the other hand, obviates the dc bus by using nine bi-directional IGBTs in a matrix arrangement to generate the variable frequency ac output directly from the ac input. With no dc bus to charge, the associated non-linear input current draw can be eliminated. Figure 5 shows the matrix topology.

For drives that use a matrix design, any input phase can be connected directly to any output phase at any time. The key to a drive's matrix operation is its ability to turn the bi-directional switches on and off at the correct times to generate the proper output voltage and frequency required to operate the motor. 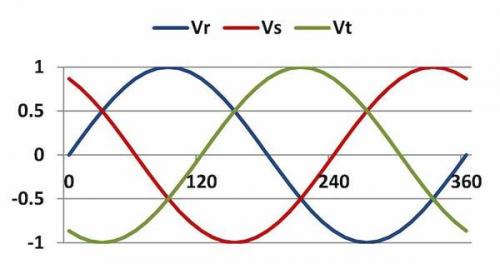 To better understand, look at the three input phase voltages shown in Figure 6. Now, in operation, the control built into the VFD's matrix design continually monitors the voltage difference between each of the phases as shown in Figure 7.

These phase voltage differences provide the VFD's matrix design with a continuous range of voltages that are available to send to the motor, along with the ability to use the nine IGBTs to switch any input phase to any output phase at any time. Also using PWM, they generate the proper voltage at the proper frequency to drive the motor as needed for the load. 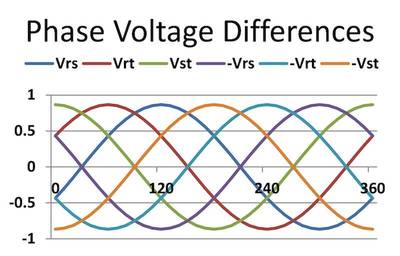 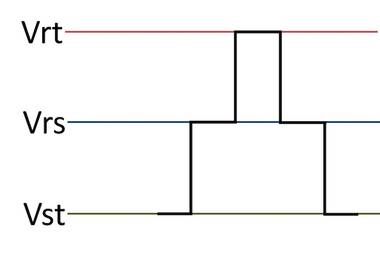 In addition, the range of voltages available enables the VFD's matrix design to build its pulses in steps to reduce the effects from steep voltage rises on motor-bearing currents and reflected waves in long motor leads. (See Figure 8).

In addition to the ultra-low harmonics and near-unity power factor, the VFD's matrix design also provides energy savings through regeneration. When a motor is being driven by a load, as opposed to driving the load, it acts as a generator, sending voltage back to the VFD. Examples include applications such as pump jacks, where the load oscillates between motoring and regeneration, and downhill conveyors that are in a continuous regenerative state. (See Figure 9). In conventional drives, dynamic braking resistors can be used to divert the regenerative energy away from the VFD and prevent a dc bus over-voltage condition. Drives with a matrix design using nine bi-directional IGBTs enable the regeneration voltage to be directed back to the supply to be credited against the user's power bill.

The main benefit of VFDs is to enable a fixed-speed motor to operate at variable speeds. However, some applications require full speed for significant periods of time. In these cases, the matrix design can close the appropriate IGBTs to provide a direct connection between input and output to the motor, thus maximizing efficiency without requiring conventional VFDs to use contactors to bypass the drive. (See Figure 10).

This mode also prolongs the life of the VFD by allowing all the IGBTs to "rest" while maintaining at a steady on/off position.

Some VFDs with a matrix design can monitor power in several ways to give instant feedback on energy savings. When provided with the dollar amount per kWh billing rate, the display on the VFD can show the following information on request:

Comparing VFDs with a matrix or conventional design

There are also other means to mitigate the harmonics of VFDs. These include active front-ends and multi-pulse transformers, which require significant additional components in combination with the VFD, all of which mean added bulk, cost, and wiring connections. The VFD with a matrix design accomplishes low harmonics all within the drive—three wires in, three wires out. Though VFDs with a matrix design are priced higher than conventional VFDs, prices are usually comparable or less expensive than other low-harmonic solutions.

VFDs with a matrix design are available in a wide range of voltage and horsepower ratings, typically up to 100 HP at 240 V and 350 HP or larger at 480 V. Look for the same Underwriters Laboratories (UL), Canadian Standards Association (CSA), CE, and Restriction of Hazardous Substances Directive (RoHS) certifications and support for induction, surface permanent magnet, and interior permanent magnet motors.

VFDs with a matrix design provide all the features and functionality users have come to expect from a conventional VFD, plus the added advantages. With heightened requirements for sustainability and compliance to IEEE 519-2014, matrix VFDs provide a cost-efficient, space-efficient, and energy-efficient means for applications.

What are other low-harmonic solutions for industrial applications?