A permanent magnet (PM) motor is an ac motor that uses magnets imbedded into or attached to the surface of the motor’s rotor. This article provides an elementary understanding behind the terminology, concepts, theory, and physics behind PM motors. 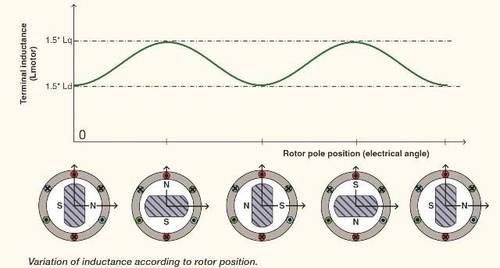 Controlling the speed of ac motors is accomplished using a variable frequency drive (VFD) in most cases. While many scenarios involve using VFDs with induction motors with stator windings to generate a rotating magnetic field, they also can achieve precise speed control using speed or position feedback sensors as a reference to the VFD.

In some situations, it is possible to obtain comparably precise speed control without the need for feedback sensors. This is made possible using a permanent magnet (PM) motor and a process called the "high-frequency signal injection method."

An ac induction machine (IM) also is commonly referred to as an ac motor. A rotating field is generated by the stator winding. The rotating field induces a current in the rotor bars. The current generation requires a speed difference between the rotor and the magnetic field. The interaction between the field and the current produces the driving force. Therefore, ac induction machines are the predominant motor operated by adjustable speed drives.

A PM motor is an ac motor that uses magnets imbedded into or attached to the surface of the motor's rotor. The magnets are used to generate a constant motor flux instead of requiring the stator field to generate one by linking to the rotor, as is the case with an induction motor. A fourth motor known as a line-start PM (LSPM) motor incorporates characteristics of both motors. An LSPM motor incorporates a PM motor's magnets within the rotor and a squirrel cage motor's rotor bars to maximize torque and efficiency (see Table 1).

Inductance: Inductance (L) is the constant of proportionality that defines the relationship between the voltages induced by a time rate of change in current that produced a magnetic field. In simpler terms, inductance is the flux linkage per unit current. It must be made clear that inductance is a passive element and is purely a geometric property. Inductance is measured in Henrys (H) or weber-turns per ampere.

The d axis and q axis: In geometric terms, the "d" and "q" axes are the single-phase representations of the flux contributed by the three separate sinusoidal phase quantities at the same angular velocity. The d axis, also known as the direct axis, is the axis by which flux is produced by the field winding. The q axis, or the quadrature axis is the axis on which torque is produced. By convention, the quadrature axis always will lead the direct axis electrically by 90 deg. In simplistic terms, the d axis is the main flux direction, while the q axis is the main torque producing direction.

PM motor equivalent circuit: A permanent magnet motor can be represented in a few different motor models. One of the most common methods is the d-q motor model.

In an induction machine, the rotor flux linkage will be the same between the d axis and the q axis. However, in a permanent magnet machine, the magnet reduces the available iron for flux linkage. A magnet's permeability is near that of air. Therefore, the magnet can be viewed as an air gap. The magnet is in the flux path as it travels through the d axis. The flux path traveling through the q axis does not cross a magnet. Therefore, more iron can be linked with the q-axis flux path, which results in a larger inductance. A motor with an imbedded magnet will have a larger q-axis inductance than the d-axis inductance. A motor with surface-mount magnets will have nearly identical q-axis and d-axis inductances because the magnets are outside the rotor and do not limit the amount of iron linked by the stator field.

Pull-in current: Unlike an amplifier and servo matched set intended for motion control, a conventional VFD does not have information about the position of the motor's rotor magnetic pole. Without knowledge of the magnetic pole position, a field cannot be generated in the stator to maximize torque production. Therefore, a VFD has the ability to provide dc voltage to lock the magnetic field into a known position. The current draw required to pull in the rotor is called the "pull-in current." 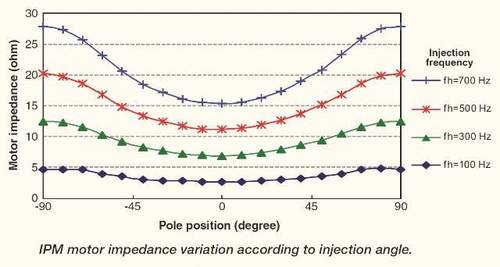 According to the injection angle, rotor impedance varies. Interior permanent magnet (IPM) motor terminal impedance decreases when the high-frequency signal injecting axis and the magnetic pole axis (d-axis) are aligned, i.e. at 0 deg. The impedance is maximum at ±90 deg. Using this characteristic, the drive can detect the rotor position without pulse encoders by injecting high frequency ac voltage/current to the IPM motor. Moreover, the high-frequency signal injection method can be used for speed detection in the low-speed region where typically full-load torque control is very difficult because the motor's back-emf voltage level is too low.

Both induction and PM machines generate back-emf waveforms. In an induction machine, the back-emf waveform will decay as the residual rotor field slowly decays because of the lack of a stator field. However, with a PM machine, the rotor generates its own magnetic field. Therefore, a voltage can be induced in the stator windings whenever the rotor is in motion. Back-emf voltage will rise linearly with speed and is a crucial factor in determining maximum operating speed.

Magnetic torque: Permanent magnets generate a flux field in the rotor. The stator generates a field that interacts with the rotor's magnetic field. Changing the position of the stator field with respect to the rotor field causes the rotor to shift. The shift due to this interaction is the magnetic torque. 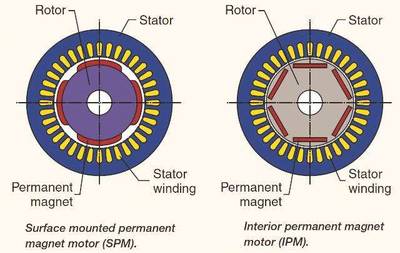 SPM motors have the magnets affixed to the exterior of the rotor surface. Because of this mechanical mounting, their mechanical strength is weaker than that of IPM motors. The weakened mechanical strength limits the motor's maximum safe mechanical speed. In addition, these motors exhibit very limited magnetic saliency (Ld ≈ Lq). Inductance values measured at the rotor terminals are consistent regardless of the rotor position. Because of the near unity saliency ratio, SPM motor designs rely significantly, if not completely, on the magnetic torque component to produce torque.

IPM motors have the permanent magnet imbedded into the rotor itself. Unlike their SPM counterparts, the location of the permanent magnets make IPM motors very mechanically sound, and suitable for operating at very high speeds. These motors also are defined by their relative high magnetic saliency ratio (Lq > Ld). Due to their magnetic saliency, an IPM motor has the ability to generate torque by taking advantage of both the magnetic and reluctance torque components of the motor (see Figure 4).

PM motor structures can be separated into two categories: interior and surface. Each category has its subset of categories. A surface PM motor can have its magnets on or inset into the surface of the rotor, to increase the robustness of the design. An interior permanent magnet motor positioning and design can vary widely. The IPM motor's magnets can be inset as a large block or staggered as they come closer to the core. Another method is to have them imbedded in a spoke pattern.

Only so much flux can be linked to a piece of iron to generate torque. Eventually, the iron will saturate and no longer allow flux to link. The result is a reduction to the inductance of the path taken by a flux field. In a PM machine, the d-axis and q-axis inductance values will reduce with increases to the load current.

Flux in a permanent magnet motor is generated by the magnets. The flux field follows a certain path, which can be boosted or opposed. Boosting or intensifying the flux field will allow the motor to temporarily increase torque production. Opposing the flux field will negate the existing magnet field of the motor. The reduced magnet field will limit torque production, but reduce the back-emf voltage. The reduced back-emf voltage frees up voltage to push the motor to operate at higher output speeds. Both types of operation require additional motor current. The direction of the motor current across the d axis, provided by the motor controller, determines the desired effect.

The angle of excitation is the angle at which the vector sum of the d-axis and q-axis waveforms are excited to the motor with respect to the d axis. The d axis is always viewed to be where the magnet exists. Maximum magnetic flux is achieved at the q axis, which is 90 electrical deg from the d axis. Therefore, most references of the angle of excitation already take into account the 90-deg difference from the d axis to the q axis.

A PM motor's power generation depends on the configuration of the motor magnets and the resulting motor saliency. Motors with a high saliency ratio (Lq > Ld) can increase motor efficiency and torque production by incorporating the motor's reluctance torque. An inverter can be used to change the angle of excitation with respect to the d axis to maximize both the reluctance torque and magnetic torque of the motor.

There are few types of permanent magnet materials currently used for electric motors. Each type of metal has its advantages and disadvantages.

Permanent magnets are hardly permanent and do have limited capabilities. Certain forces can be exerted onto these materials to demagnetize them. In other words, it is possible to remove the magnetic properties of the permanent magnet material. A permanent magnetic substance can become demagnetized if the material is significantly strained, allowed to reach significant temperatures, or is impacted by a large electrical disturbance.

Secondly, temperatures also can affect a permanent magnet. Temperatures force the magnetic particles in a permanent magnet to become agitated. The magnetic dipoles have the ability to withstand some amount of thermal agitation. However, long periods of agitation can weaken a magnet's strength, even if stored at room temperature. In addition, all magnetic materials have a threshold known as the "Curie temperature," which is a threshold that defines the temperature at which the thermal agitation causes the material to completely demagnetize. Terms such as coercivity and retentivity are used to define magnetic material strength retention capability.

Recent advances in drive technology allow standard ac drives to "self-detect" and track the motor magnet position. A closed-loop system typically uses the z-pulse channel to optimize performance. Through certain routines, the drive knows the exact position of the motor magnet by tracking the A/B channels and correcting for error with the z-channel. Knowing the exact position of the magnet allows for optimum torque production resulting in optimum efficiency.

Servomotors are permanent magnet motors used for motion control applications. Typically, in an interior/internal permanent-magnet motor design, these motors are paired with a specific amplifier as part of a matched set to maximize performance. The amplifier has been fine tuned to the PM motor to reach optimum performance by its manufacturer. The motion amplifier/servo configuration typically uses motor feedback, which also provides a magnetic pole position and speed feedback.

Christopher Jaszczolt is a drives product management specialist at Yaskawa America Inc. He has more than nine years of experience in motion control. In addition to his current title, Jaszczolt has worked as a technical support engineer and an application engineer. He has a BSEE from Northern Illinois University, DeKalb, Ill.

This article appears in the Applied Automation supplement for Control Engineering
and Plant Engineering.