IHS Markit predicts that global machinery production revenues will grow 2.2% in Q2 2017 as a result of broad-based improvements for most industries and that this trend will continue over the next several years. 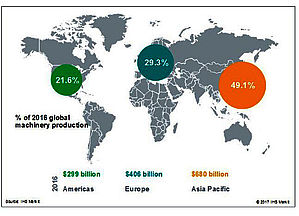 IHS Markit forecasts improvement across the board in 2017 due to improvements in machinery production revenues and unit shipments. Overall, momentum in the global economy firmed up in Q4 2016 progressing towards February 2017 due to a number of factors, including the rise of commodity prices—especially oil and gas, metals and crops.

Machinery production sales are often closely tied to the performance of the commodities to which they are related. IHS Markit predicts that global machinery production revenues will grow 2.2% in Q2 2017 as a result of broad-based improvements seen across the board for most industries, alongside better overall GDP and PMI performance worldwide veering into growth territory.

Machinery production for agriculture is highly concentrated by region, and most of the global revenues in 2017 were concentrated in the top five countries—with China and the United States making up more than two-thirds of global production. Leasing is becoming more common, especially in North America, as companies and farms try to reduce their cash outlay.

Agricultural production and yields have increased steadily over the course of the last few decades, a testament to the productivity and innovation of the sector. Since the mid-1990s, crop production has increased by 60% even as the land area used to raise crops has decreased. This trend of increasing yields may slow, though, as population growth slows. That is not the case in some countries, as subsidies also play a big role.

This was demonstrated in China where the government heavily subsidizes the agricultural machinery segment. IHS Markit has predicted its growth to continue well in to 2021, with a compound annual growth rate (CAGR) of 6% from 2016 to 2021.

The Middle East will see good growth in coming years, as many nations seek to employ more advanced, very-high-yield production practices. However, because of a lack of arable land and the high cost of farming in the region, the scale there is expected to remain small.

Getting from point A to point B

IHS Markit predicts production of materials-handling equipment (conveying and lifting) will grow more than 4% per year through 2021, but will face fierce competition in 2017 from other types of equipment such as automated guided vehicles (AGV) and automated storage retrieval systems (ASRS). However, production of conveying equipment is still predicted to grow the fastest due to an expanding middle class and the growth of online retail giants like Amazon, eBay and Alibaba. In addition, an increasing demand for packaging and food and beverage production has propelled the adoption of high-tech conveyors with better throughput rates.

These high-tech conveyors also are necessary for fully-automated ASRS and drone delivery systems. Furthermore, lower air fares are encouraging more people to travel by air, which is increasing the demand for baggage-handling conveyor systems at airports. Other than that, the birth of intelligent conveyors, which can organize products without standard separators or expensive robotics, is reducing the footprint of material lines and enabling them to consume less power.

The cranes-and-hoist sub-sector has been affected by a reduction in capital expenditure in the shipping industry, which accounted for much of the market for such machinery. The large second-hand crane-and-hoist market in the Asia Pacific region is contributing to reduced sales of new cluster equipment for products, such as bridge and gantry cranes. With the recent change in shipping fuel regulations, which governs international shipping (cutting sulphur limits in marine fuel from 3.5 to 0.5% in 2020), will bump up shipping costs and hurt port equipment sales even more.

There is also a large second-hand market in Asia for trucks, but it is balanced by manufacturers that are opting to incorporate newer machinery into their legacy and automated fleets.

Asia made up nearly two-thirds of the global machine tool market in 2016. In China, the largest market for machine tools (estimated as more than 30% of the global total in 2016), there is a divergence in the outlook for machine tools, with sectors dependent on heavy industry suffering, and the automobile, electrical and lighter industry sectors still growing strongly in Q2 2017. In vehicle manufacture, increasingly advanced machinery is needed to cut the different types of composite materials that go into building greener and cleaner motor vehicles.

Light-vehicle production in mainland China is expected to increase 2% and reach 27.9 million units in 2017. SUV production should maintain double-digit growth. Automobile production in Mexico is predicted to expand 15% in 2017, moderating at lower growth rates over 2018-19. The total already incorporates the output from plants currently under construction or under firm projects. Most of the new output will head to the United States. However, in the United States in early 2017, total passenger car sales were down 11.5% year-over-year, while light truck sales were up 5.6% in the same period. Thus, we expect light truck sales continue to dominate the landscape given current fuel prices. Still, IHS Markit forecasts a moderate decline in the automotive industry output for the full year of 2017.