Fluid power applications are complex. It can be a challenge to choose between an open- or closed-loop design; both have advantages and disadvantages. See table.

Some of the most complex motion control problems come from fluid power applications because the medium involved (air or hydraulic oil) doesn't respond to control inputs in a linear manner. The choice between using open-loop versus closed-loop control revolves around the concept of feedback, and how important it is for the particular motion system to take feedback into account.

Using feedback in closed-loop control can provide smooth and precise motion, but this requires a motion controller that is able to take advantage of the feedback information. Open-loop systems may not require the setup and programming of a closed-loop motion system, but they also don't have the flexibility and precision that closed-loop systems provide. The decision ultimately comes down to on the application and its specific needs; both open- and closed-loop controls have their benefits and drawbacks (see Table).

When to choose open-loop control

Many applications use open-loop control, including cases where precise positioning or velocity control of the actuator (the "business end" of a motion system) is not critical. With open-loop control there is no attempt to match the actual velocity, or pressure/force being exerted by a motion system to computed target values. There's an ultimate goal to reach, but exactly how the system gets there is not of great importance. Often, open-loop control is used when speed is important, but precise operation is not, such as in retracting a tool after a machining step has been completed, or in pre-positioning a tool before it comes into contact with a work piece. The actuator can travel at varying speeds depending on changes in load, or in the case of hydraulic systems, the pressure or temperature of the oil.

This is not to say that open-loop controls are totally "feedback-free." Open-loop systems may be used with discrete limit switches, photo eyes, or pressure switches to determine when the motion should stop or when a pressure limit is reached. A special motion controller is typically not required to operate on/off motion controls—a general-purpose computer such as a programmable logic controller (PLC) is sufficient. Using physical limit devices that must be positioned in a specific location can cause problems if the machine is used to process materials of different dimensions because the limit devices will need to be physically moved during production changeovers. Whether or not open-loop control is used when operating, it should be used during the setup of a fluid power system. When checking the valve plumbing and wiring polarity, find the positive and negative limits, check the linearity of the valve, and check for smooth motion.

When to use closed-loop control

Applications that require profile following, synchronization, or gearing the motion of one axis to that of another, or those requiring a high degree of operational flexibility or speed with accuracy must use closed-loop control. Other applications include those that need the ability to maintain precision with changing loads or environmental conditions. 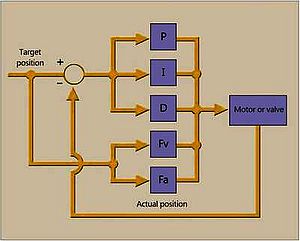 Closed-loop control can be achieved with different levels of complexity or sophistication, depending on the needs of the application. Some simple analog controllers operate with just proportional control, where the controller's drive output changes as a function of the magnitude of the difference between actual and target temperature, flow, position, velocity, or pressure. In this case, "P" in a proportional-integral-derivative (PID) control-loop diagram (see Figure 1) is referred to as proportional control.

Proportional-only control will work adequately in some motion systems if there is enough mechanical friction to provide damping and thus avoid the chance of oscillations occurring. However, many hydraulic systems tend to be under-damped (acting like a mass on a spring). In such cases, increasing the amount of proportional gain to get an oscillating system under control may actually make the oscillations worse.

Since a control system relying on P-gain-only requires an error in order to cause the system to move at a particular velocity, should the need to change velocities occur, there will be a lag in the system's response to the new input. For tighter closed-loop control, other gain terms are required, with each one playing a specific role.

Using an integral gain is often necessary to get a motion axis to move to a target position quickly and reliably. Even a minute error between the actual and target states can cause a proportional-control-only system to move the actuator to the target setpoint.

The mechanical realities of a system, such as the changes in the null characteristics of a hydraulic valve, or friction among the moving parts (static and dynamic), may keep the system from hitting the target. The integrator component of the control equation accumulates the amount of errors over time, eventually causing the output to increase by the amount necessary to cause the actuator to move.

The derivative gain provides electronic damping that helps to keep the actuator from oscillating as the proportional gain is increased. How well the derivative gain works depends on some key factors, like the resolution of the feedback device output values (such as how smoothly they change) and whether or not there is strict adherence to known sampling times. Since derivative gain is a multiplicative factor applied to the amount of error in velocity, it is critical that the velocity of a motion axis be determined precisely.

The effectiveness of a closed-loop control system depends on the system's response to the error between actual and target measurements of the system. However, a limitation of using PID-based controls alone is that there won't be any motion unless there is at least some error. In many applications this is not a problem, but precise and smooth motion tracking can be enhanced by estimating the required output before the error occurs. That's where feed forward gains play a role.

Feed forwards are really just open-loop gains that are used as predictive factors. They are particularly useful in hydraulic systems. This is in part because of the fluid characteristics and the physical difference between how hydraulic fluid acts on the rod and open sides of the piston in a hydraulic cylinder. Separate gains typically are required to achieve the desired velocity and acceleration of a piston in each direction of motion.

In theory, if the predictive gains are computed correctly, there should be no error when the system moves. Real world systems don't function perfectly, however. With ultimate system stability in mind, the goal is to use the predictive terms to get the system to function to within about 90 to 95% of the desired motion profile. Then the error-correcting power of the PID algorithm needs to deal with just the last five to 10%.

Beyond ensuring precise system operation, the use of a programmable motion controller has the additional advantage of enabling the control parameters to be changed quickly and easily to meet changing production requirements. New setpoints can be downloaded via Ethernet from a supervisory PLC or computer to enable making new part types, and there's no limit to how often the parameters can be changed.

Tighter control of motion profiles using an electronic motion controller has the additional advantage of making smoother motion possible, reducing shock and vibration in the machine, decreasing maintenance costs, and extending a machine's usable life. These benefits come while also improving the quality and uniformity of production output.

A caveat when doing pressure or force control in a hydraulic application is that the actuator will move suddenly if the force or load opposing the motion disappears suddenly. If this is an issue, using open-loop control with pressure or force-limiting capability could be a better solution to minimize the effect of unwanted control responses. 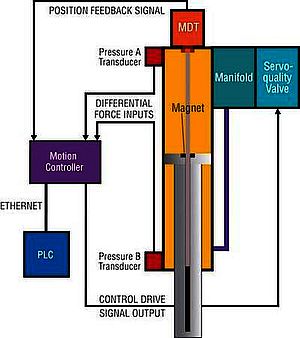 Open-loop control often is combined with closed-loop control in a single machine, with each control method being used in a different part of a machine cycle to provide the best advantage. For example, open-loop motion can be used in the retract direction to quickly open a press so that a manufactured part can be ejected. Tuning the machine's operation overall can be simplified, since only the extend direction (the part of the cycle that does the pressing) must be tuned for precise operation-the open-loop part of the cycle does not need to be tuned.

Figure 2 shows a system diagram of the hydraulics used in a high-end press, with position feedback provided by a linear magnetostrictive displacement transducer (MDT) in the cylinder and differential pressure (force) feedback provided by pressure transducers mounted at either cylinder end. Control of the hydraulic fluid flow is provided via a proportional valve. The motion controller is programmed to smoothly transition from open loop to closed loop motion as the press cylinder and die come into contact with the work piece, and then transition back to open-loop motion as the press ram is retracted.

Choosing between closed-loop and open-loop control for a fluid power application ultimately depends on the requirements of the specific application. With a motion controller that is programmed to switch between modes, the system integrator can gain the advantages of both methods. It should be noted, however, that even the best motion controller can't compensate for poor overall system design or poorly-selected components elsewhere in the system such as motors, valves, or transducers required to close the control loop.

What other advantages and benefits do open- and closed-loop controls provide users in fluid power applications?