There are many aspects to consider when choosing an ac induction motor such as supply voltage, horsepower rating, and the application itself. 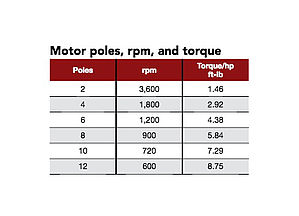 AC induction motors are not often given the design consideration a machine deserves. The thought is "one size fits all" and the selection of a motor only depends on its voltage, power, and base speed. However, there are many other aspects to consider such as supply voltage, horsepower rating, and the application itself. What is the motor's purpose and how is it going to make everything faster and more efficient?

The starting point for specifying a motor is the supply voltage, the horsepower rating, and the base speed for the particular application. Another important consideration is the enclosure. Will the motor have mounting feet, a flange on the drive end, or can it have both? What are the environment's characteristics? Is rain or falling water a possibility? Is dirt or dust exposure a potential issue? In these instances, total enclosed fan cooled (TEFC) or total enclosed non-vented (TENV) motors are a good option. If the environment is clean and dry, an open drip proof (ODP) motor may be sufficient.

Due to incentives from local power companies combined with the advantages and benefits of changing the operating speed of motors, variable frequency drives (VFDs) are becoming more common methods of controlling motors. In these cases, special consideration needs to be given to the "noisy" signal these devices produce. There are several features a motor suited for use with a VFD should have; however, two stand out at the top.

The first consideration is the voltage rating of the magnetic wire used in the motor windings. This rating can range from 1000 to 1600 V, with a common value of 1200 V. The greater the distance between the drive and the motor the greater the magnitude of the voltage spikes reaching the motor. A motor that has a 1600 V magnetic wire may have a reference to NEMA MG-1 2003, Part 31, Section 4, which states that a motor shall resist corona inception voltage (CIV) damage at voltages up to 1,600 V.

The second consideration may be the constant torque (CT) turn-down ratio of the motor, often listed a "xx:1 CT". This expresses how slow the motor can run and still deliver the same torque as it would at rated speed. Below this value the torque production capabilities of the motor decrease. For example, consider a 10 HP motor with a base speed of 1,800 RPM. It can produce 29 lb-ft of torque at rated speed (approximately 1800 RPM). If it has a 10:1 CT rating, it can produce that same torque down to 180 RPM. If it is a 1000:1 CT, then it could produce 29 lb-ft of torque as low as 1.8 RPM.

Choosing between horsepower and torque

Users might also want to swap speed for torque, depending on the application. In general, as the speed of the motor increases, the torque decreases, which is also true of gearboxes and belt and chain drives. This relationship is explained by this equation: [HP = (torque x base speed) / 5252)].

The horsepower and base speed of the motor, along with any associated gearing, can be selected to meet the original goal, which is reducing the cost of equipment, size, and lead time for replacement components.

Aspects such as supply voltage, horsepower rating, and the application itself should be considered when choosing an ac induction motor.

Harsh or wet conditions may require a special kind of ac induction motor for the particular application.

Base speed and torque also should be considered by the user, depending on the application.

What other factors should be considered when choosing an ac induction motor for an application?