The industrial Ethernet market is set to grow from its current market value of more than $20 billion to over $72 billion by 2024 according to a research report by Global Market Insights. 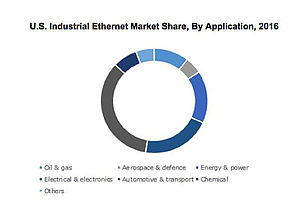 The industrial Ethernet market is set to grow from its current market value of more than $20 billion to over $72 billion by 2024 at a compound annual growth rate (CAGR) of 15% according to a research report by Global Market Insights.

The hardware segment is expected to hold a major share of the industrial Ethernet market by 2024 owing to the extensive adoption of Ethernet switches, hubs, gateways, and connectors to enable industrial automation functions. The service segment is projected to exhibit the fastest growth between 2017 and 2024 reporting a CAGR of around 27% owing to the need for effective installation, testing, and maintenance of the network infrastructure to ensure a long-term stability.

The installation and testing service segment held a major share of the industrial Ethernet market in 2016 and is expected to maintain this dominance over the forecast period. As different hardware and software components of the infrastructure need to be integrated with the legacy systems used in industrial settings, the demand for effective functional testing and the implementation of such components will witness a steady growth over the forecast timeline.

The oil and gas segment is expected to witness an accelerated growth throughout the forecast timeline as industrial Ethernet market solutions enable mission-critical communications in harsh conditions in oil and natural gas extraction environments. Due to the capabilities such as reliability, ruggedness, and remote access, the technology proves to be advantageous over office-grade ethernet equipment for operating in the harshest environmental conditions.

Ethernet TCP/IP protocol is projected to witness an extensive adoption throughout the forecast period for facilitating connections between various devices such as robots, sensors, programmable logic controllers (PLCs), and other industrial machines. As the protocol enables effective real-time communication of time-sensitive factory/floor data in the industrial environment, it is expected to witness a large-scale adoption between 2017 and 2024.

North America will hold the majority share of the industrial Ethernet market by 2024, accounting for over 50% due to the rapid growth of manufacturing automation applications in the region supported by Industrie 4.0. The supportive government initiatives and policies for driving the adoption of industrial automation among the manufacturing and automotive industry are also estimated to have a significant impact on the market growth throughout the forecast timeline.