Testing a direct drive and geared rotary servomotor shows there are some significant differences between the two when actually put into practice.

A geared servomotor competes head-to-head with a direct drive servomotor using the same load, motion profile and mounting fixture, simulating a real-world application to determine if the performance advantages of the direct drive system outweigh the higher initial cost. (In part 1, the case for decreasing backlash and increasing torsional stiffness was presented.)

For this test, the following evaluation criteria were considered:

For this test, a servo system was created representative of an indexing table application where the table has high rotational inertia. The load inertia, root mean squared (RMS) torque, and speed requirements were chosen such that a gearmotor and direct drive servomotor would both operate near their rated limits. To measure the positioning accuracy and cycle time of this simulated “machine,” an external encoder was affixed to the load to precisely measure the position of the load itself. This external encoder was not used in closing the position loop, but only as an independent measuring tool for the test. Performance differences were quantified using the data gathered from both the motor encoders and load side ring encoder feedback.

Before designing the actual test hardware, a gearmotor and a direct drive motor were chosen for comparison. These motors were selected as the 50:1 gear reduction gives the gearmotor comparable torque, speed and overall size to the direct drive motor, as seen in Table 1. Based on these characteristics, it is no stretch of the imagination that both of these motors could be competing against one another to control an axis on a new machine.

After selecting the motors and motion profile, the servomotor sizing software was used to find a load inertia to push both motors nearly to their rated limits, ensuring that neither motor was over or under-sized for the application. The motion profile selected was a trapezoidal indexing move of 45 degrees in 200 ms followed by 300 ms of dwell, a motion profile similar to what one might see on a large indexing table in an assembly, inspection, or packaging application. This motion profile can be seen graphed in Figure 1. 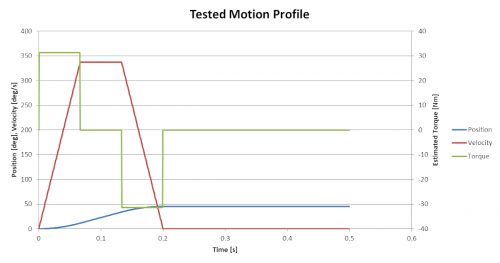 For this test, the average settling time is defined to be the time elapsed between when the commanded motion signal ended and when the load had settled to within a tolerance window of the goal position. As seen in Table 2, the load driven by the direct drive motor settled much faster on average than when driven by the gearmotor.

For machine operations with short cycle times, the settling time advantage becomes more significant. In this test, even a conservative cycle time of 500 ms with a move time of 200 ms provides an impressive point for comparison.

Figures 4 and 5 depict the oscillation of the load that occurred at the end of the motion for both the gearmotor and direct drive motor. The gearmotor showed damped oscillation at the end of the move, typical of this mechanical configuration, whereas the direct drive motor had virtually no vibration. This difference in vibration amplitude and duration was seen uniformly across all tests. 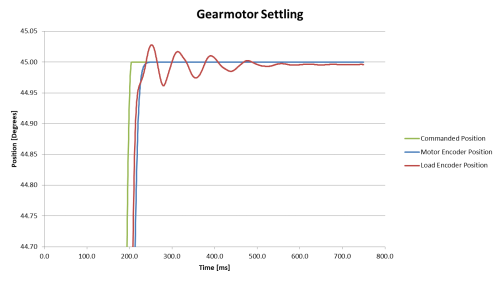 The visible oscillation and additional settling time required by the gearmotor is attributed to a combination of backlash and finite torsional stiffness seen in the gearbox. In fact, the backlash is visible in Figure 4 as seen by the load position leading the encoder position during most of the deceleration before springing back and oscillating. The gearing is interlocking at the forward mechanical tolerance point during acceleration and then shifting to the reverse mechanical tolerance point during deceleration.

This deceleration, coupled with the torsional stiffness, effectively acts like a spring, causing the load to bounce back and forth until friction and internal losses dampen the motion. The servomotor is attempting to compensate, but due to backlash much of the oscillation is uncoupled from the servomotor and does not manifest as a position error on the servomotor encoder.

It’s also worth noting the motor encoder shows the load has settled much sooner than it has. If the process requires the load to settle to a tighter tolerance than is achieved when the servomotor indicates it has reached the target position, delay timers may be required. These timers add wasted time to the motion profile as the delay period must be conservative enough to remain effective across a wide range of operating conditions.

The direct drive motor provides a more direct look at the actual motion of the load; therefore, the feedback from the encoder is sufficient to optimally sequence the machine without additional timers. Another solution would be to use an external encoder to fully close the loop with the load; however, this adds additional design, fabrication, maintenance, and material costs to a bill of material  (BOM) and can be the most cost prohibitive solution.

Percentage-wise, the results seen in Tables 2 and 3 show significant improvements with the direct drive motor, but in reality, the motor is only shaving off a few hundred milliseconds per movement. This small difference may seem insignificant; however, these fractions of a second add up over the lifetime of a machine.

Consider an indexing table that has eight stations; the table rotates 45 degrees in 200 milliseconds (nominally) during each index. After this rotation, a secondary process is performed for 300 milliseconds to complete the cycle. The table needs to be settled to within 0.050 degrees for the widget to be made correctly. Every rotation produces a $0.05 widget, and the machine runs one 8 hour shift per day.

In this scenario, the increased throughput brought about by using a direct drive motor would allow the motor to pay for itself in less than 14 days, despite the direct drive system costs more than the gearmotor system.

One might assume that processes don’t need the level of accuracy provided with a 0.050-degree settling window; however, on a 5-foot diameter table, a 0.050-degree tolerance allows a float equivalent to +/- 0.026” or slightly less than 1/32-in., in either direction at the edge of the table. When put in this perspective, it’s easy to understand that most processes require a window even tighter than +/- 1/32-in. to be completed accurately, and the tolerance is not unreasonable as such.

A gearmotor with an external encoder would be closer to the performance capabilities of a direct drive motor, but the additional mechanical design, machining, installation, maintenance, and programming time costs of a fully-closed system make it the most cost prohibitive and engineering intensive solution.

What are your biggest considerations when choosing a motor?