Tuning the servo system to performance specifications can be among the most troubling tasks in machine building. It’s not always about what three numbers should go into the proportional-integrated-derivative (PID) controller. In an April 15 webcast, “How to Tune Servo Systems: Force Control (Part 4),” Joseph Profeta, Ph.D., director, Control Systems Group, Aerotech, covered how to tune the force loop tools to meet system specifications and create an arbitrary force trajectory, limitations of a force loop around the position loop and current loop, how to command arbitrary force trajectories, and how to minimize bump. 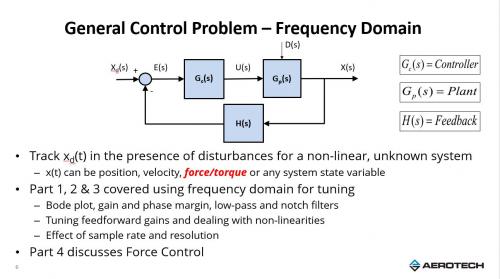 Profeta answered questions in the live webcast about force control in servo system tuning, and more answers from webcast participant questions are provided below.

Q: Why is tuning so difficult to attain smooth performance, linear servo, pick and place, at speed?

A: It is possible with pick and place that the linear servo stability is affected by the load change on the axis. Using gain scheduling for different loads is one strategy to use.

Q: How do I tune a servo motor and troubleshoot?

A: Generally depending on the servo loop structure, starting with low proportional gains is the first step. With a stable system, stability can be assessed with the loop gain frequency response and gains adjusted as needed. A demonstration of this can be seen in the first webinar in this series.

Q: Is there any concern with the ringing in the transients?

A: This is application-dependent. Some force applications cannot tolerate overshoot. In this case, tune the system such that it is critically damped to have no overshoot in a step response. If you are able to contour the force command, this also can reduce the transient oscillations.

Q: What effects might you see with precision rotary stages subject to temperature transients? Can this be mitigated with adding some thermistors to the control loop?

A: Say the environment were to slowly fluctuate between 10 and 35°. The temperature variations will cause the mechanical system to grow or shrink. This can also include the feedback device depending on what feedback is used and how it is mounted. If the feedback is growing and shrinking with the mechanics, the control loop will not be able to correct for temperature variation. As suggested, adding some temperature measurements to the system can be used to add a correction into the system. Some controllers have a linear interpolation algorithm for this purpose. 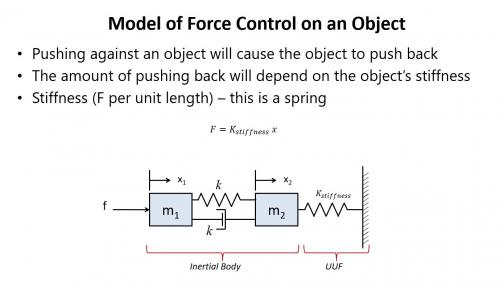 Q: How does the I2 gain impact the performance in force control? (Or stated another way: Why do we use two integrals in force loop when the force loop is wrapped around the position loop?)

A: This is used in applications to control the height of an axis above a target when ramp commands are needed. It is not used in the force loop.

Q: Have you considered optical sensor as position feedback in the loop?

A: Yes. This can work well if the sensor is linear and high resolution enough.

Q: After touch, is there any compensation on force loop? 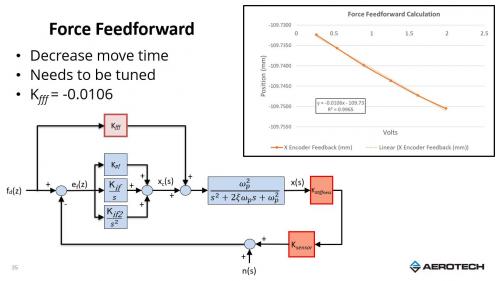 What other servo tuning questions do you have?