Due to changing user requirements, new machine design concepts are needed: mechanic components are being replaced by mechatronic systems. To simplify the application of mechatronic systems by machine builders and system integrators and to give the users a better understanding, PLCopen and its members developed a set of standard motion control function blocks combined with a state diagram.

The PLCopen Motion Control group specified an independent library of building blocks. This provides a standard command set while hiding the underlying architecture and complexity to the user. This is called abstraction.

This structure can be used on many platforms and architectures. The application may be developed independent of control architecture or brand, and the developer can decide which architecture will be used at a later stage of the development cycle. Advantages for the machine builder are, among others, lower costs for supporting different platforms and freedom to develop application software in an independent way, without destroying productivity. In addition, system maintenance is easier, and the education period is shorter. 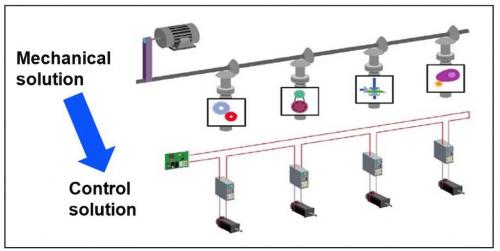 An important user group is the machine manufacturing group, with the packaging industry being the most active. The packaging industry must react quickly to changes in consumer behavior by providing alternative packaging technologies. This must be done by more flexible machines in their production lines. And to provide this flexibility, one must go beyond mechanical solutions, to mechatronic alternatives. Of course, this includes adaptable software which plays a key role.

Changing consumer needs translates into a need for more flexible manufacturing and packaging. Coffee is a simple example. We all are familiar with the vacuum-sealed pounds packs, the bricks. They have been on store shelves for ages. Supermarket shows have an enormous variety, with different tastes and different packaging technologies. The basics of coffee are not changed. The process side is finalized and cannot provide much more efficiency. This means attention is focused to the presentation in the market, and so to the consumer.

Another example is knäckebröd (Swedish flatbread), and similar items, containing smaller entities within the same package to guarantee product freshness. To realize this change, the infrastructure in the production environment must be changed: a packaging function must be added.

The same production lines need to perform these and other sometimes temporary changes.

A new generation of a packaging machine must fulfill two requirements for the user: maintenance-free machines (or at least low and predictable maintenance) and easy-to-clean for maximum hygiene. If you take these two goals for new packaging machine development, what will be the outcome?

They require the machine builder has to remove all mechanical parts that can attract dust or needs oil: Items like pullies, belts, gearboxes and mechanical cams.

In practice, this means a conventional machine (Figure 3) with 118 functional units will be reduced to 23 function units, providing an 81% reduction.

How to move to a mechatronic machine design

Moving to a more mechatronic design from a traditional mechanical design results in fewer components and it is easier to clean. A mechatronic operated system also is cleaner, more simple, more transparent, faster and cheaper. This is what the end user wants.

With a mechatronic solution, the control system and its software take essential roles. It is about the software in the control system and not the quality of the mechanics anymore. This often results in a different problem within the average machine manufacturer, on average, in business for from 50 to 100 years and family owned, with a mechanical design background. It is extremely difficult to change from an organization with a classic mechanical mindset, into one focused to software and control, with mechanics coming at a later stage.

Within PLCopen motion control this is recognized, and a tight coupling between logic and motion tasks is realized. Control software is playing an ever-increasing role in the success of the packaging machine. Machine designs contained almost no software 30 years ago. Now software represents about 50% of the total cost on a production line.

The motion control market has a variety of motion systems.. All have their own proprietary technology, languages, dialects, buses, development environments and other variances. Despite the need for standardization, it was unavailable.

Address such a user on a different level. A level where all the system aspects are implemented in the motion control functionalities, and as such hardware independent. PLCopen Motion Control standards do this.

The first part of the PLCopen motion control specification includes motion functionality for single axis and multiple axes, several administrative tasks and a state diagram. The latter is for control and safety aspects: Not every command can be issued to a machine at all times; one has to go through a certain routine.

Solution independence is shown in testing a newly-connected axis. Whatever system is used, the user only needs a few steps to rotate the axis: turn the power on, start the home procedure, and finally give the axis a move command like “move-absolute.” With these three simple steps, the axis has to move.

One does not want to know what network is behind the interface. That is something the supplier has to do. The standard supplies the buildings blocks called in a small program. Compile the code, download it and play it. If the axis doesn’t turn, the supplier has a problem, not the user.

Part 3 – User Guidelines shows how the user can create a set of building blocks based on the IEC standard and the PLCopen Motion Control function blocks. These blocks can be reused across projects and platforms.

The hardware suppliers with new systems also see this as an important step forward: They do not have to develop their own specifications anymore. The motion suppliers with a longer existence were a little skeptical to accept the motion control standard because they were afraid their possibilities for differentiation would be restricted.

That fear is unfounded. There are different networks, control systems, operating systems, installation and maintenance tools, ranges of drives, motors and encoders. Diversification is applicable. An absolute movement remains an absolute movement in any environment. It’s best not to change that. Diversification is possible with the supplied building blocks, the software suite of tools, the range of servos, encoders, the tuning, and other design elements. Motion suppliers are willing to integrate their existing platforms into one environment while merging the know-how of their different motion control groups to increase synergy. The motion control standard offers a potential way out of a tangle of different implementations.

The next link in the chain is the machine builder. With some, there’s a clear technology break with the past. They are working with knowledge centers that develop mechatronic solutions. This trend resulted in mergers and acquisitions, creating bigger operations to enlarge and broaden the market by offering a new generation of machinery.

At the end of the chain are end users that buy and use the machines. They want flexibility and less downtime: faster, better and cheaper. PLCopen motion control standards support this.

Are your machine designs including motion control standards to reduce machine complexity and maintenance?