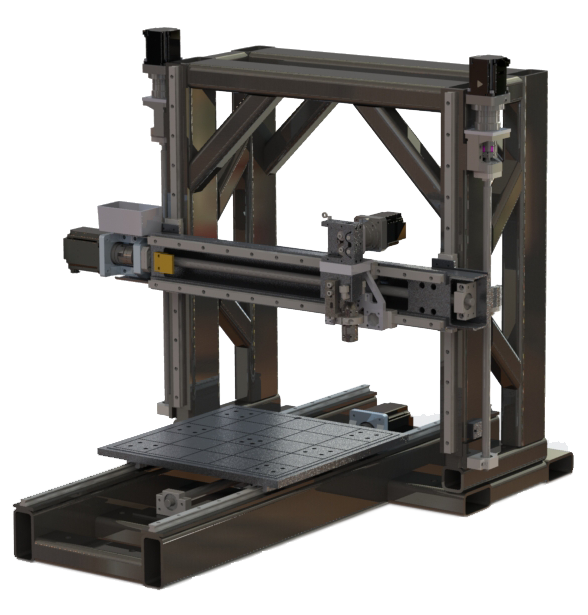 Fort Worth, TX.  One of the big attractions at April’s RAPID+TCT 3D printing expo was a printer that raises the bar in processing speed. The machine’s advances are achieved through technology that is new to the field of additive manufacturing, and was drawn from the world of automated industrial machinery.

The new printer, developed in a cooperative effort between Titan Robotics and Yaskawa America, is able to achieve an impressively fast printing speed of 350 millimeters per second. When moving between print events, the print head can travel between two precise points at a remarkable one meter per second.

The step forward in speed comes from two sources. Titan contributed a welded steel frame that sets a new industry standard for machining precision and structural strength. Yaskawa helped Titan replace a set of standard motion control devices with Yaskawa servo systems and machine controllers, which are more commonly found in the world of high end automated factory equipment. Check out the video!

“We’re really focused on having an accurate, robust machine that can do big parts really quickly and reliably, over and over again,” said Clay Guillory, Titan founder and  CEO, adding, “Our customers want something they can trust…they can’t afford to waste two weeks of print time on a really large, mission critical part.”  The new Titan/Yaskawa machine delivers on this desired outcome by using three industrial technologies:

The result is a great step forward for both print quality and cost effectiveness. “I think this is a sign that we’re seeing the industry rise to the next stage in its development,” said Kevin Barker, Director of Sales for Yaskawa’s Motion division. “We’re seeing companies like Titan enter the top tier of the business. More of the producers who started at the hobbyist end of the industry are stepping up to create products that outperform the high-cost competitors who once set the standard in this technology,” he said. “I’m glad that we could play a part in moving the industry forward, because it creates an easier path to innovation for everyone…both printer builders and the end users who are using 3D technology to create their own innovations.”