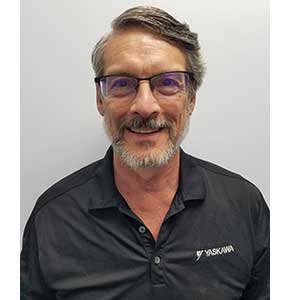 Wow, 27 years, how did that happen? I have asked myself that question many times, especially when I realize that I am the only employee working for Yaskawa left from the original Rosa Automation.

Rosa was a small UL508 shop in Southern California, founded by Pierce Verleur, now an independent representative of Yaskawa America.  I stayed on as the company merged with EMS – creating EMS/Rosa - where we focused on supplying highly customized bypass panels to the HVAC market. Oddly enough, one of our main competitors at the time was Magnetek — a company with which we would also later merge.

During my Magnetek days, we faced many challenges. The foremost in my mind is our work on modernizing the monorail system at Disneyland. The monorail attraction at the park was produced in the 1950’s and was cutting edge at the time. However, by the late 1990s, it needed updating. The project started with Magnetek, but shortly afterward we became part of Yaskawa.

As project manager for this project, the experience increased my working knowledge of AutoCAD and Excel. It also gave me considerable hands on experience, which would span a couple of years to complete all four trains.

In 2005, I found a new niche at Yaskawa and got my first experience with the water pumping business. Yaskawa had partnered on a vertical turbine pump project with a customer in Idaho. With this new assignment, I was to help create a custom firmware package that would provide pump application-specific features and user interface in our drive for sale to the irrigation market.

Since this was custom firmware that did not have a dedicated customer, we had final control over the design. We made numerous trips all over the country and spent many hours in the lab testing various beta revisions. It was the beginning of what would become the iQpump product line today.

Business-wise this was a difficult time for me, as I was spending large amounts of company revenue with nothing to show for it. Adding to the pressure was the fact the company was not yet sold on the potential of this drive.

Nonetheless, we persevered. At the same time, Bart deVries, of Baseblock Software, was contracted to develop custom firmware and would later develop the first working beta versions of iQpump that were tested on vacuum pumps.

I continued to work with Bart, adding and testing new features that were continually being requested. I was soon introduced to another customer that provided me with a greater insight to pumping water and it was concluded that we had to give birth to this baby and leave it to future revisions to add new features. This is a process that continues to this day.

The development of iQ is my greatest professional accomplishment and I am proud to know that it will be providing the company revenue long after I stop receiving a paycheck. Looking back on it now I realize that no single person is responsible for its creation but a collaboration of individuals with a vision, hard work, and customers that created it inside a company culture that allowed it to develop and grow. This is a major reason why I have stayed at Yaskawa so long.

These days I concentrate on dispersing the knowledge gained over the years of development, troubleshooting, and customer support to the next generation of associates that will carry this product into the future. I still work on developing new opportunities for Yaskawa as they come into view.

My personal accomplishments are varied, most people may not know that I am a 5-time national and 2-time world champion in a team freefall skydiving competition called Relative Work (or RW for short). This endeavor took me to China in 1980, South Africa in 1983 & 87, and Yugoslavia (the area now known as Croatia) in 1985, as well as all over the United States.

These days to fill in my time between work and visiting the grandkids I took up golf a few years ago, I guess I need to maintain a certain level of frustration in my life. I count my greatest accomplishments as my soon to be 30 year relationship with my wife, Judy, our 4 kids, and currently 5 grandkids. I have hope for one more.