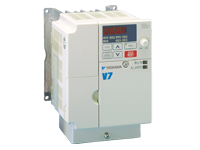 The V7 / Configured package provided a V7 in a NEMA 1 or NEMA type12 enclosure, with space for several commonly used options, such as reactors, input filters, circuit breakers, etc.

The V7 Drive is a Legacy product and is no longer promoted in the Americas. Earlier versions of this product were named GPD 315/V7, GPD 315 or VS Mini V7.